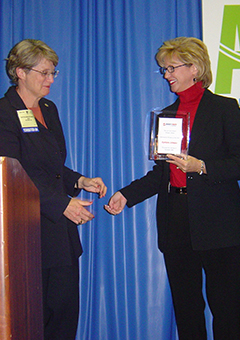 Kathleen Schmatz, who retired as president and CEO of the Auto Care Association in 2015 after 13 years with the association, launched her career in the aftermarket at Babcox Media. Schmatz says she started as a “low-level editor” for Tire Review, later convincing leadership to let her create a marketing department at the company. She eventually became group publisher of the Tech Group at Babcox. She joined the Auto Care Association (then AAIA) in 2002, after 30 years with Babcox Media.

In addition to being founding president of the Women’s Board, Schmatz is credited with many significant accomplishments for the aftermarket industry as a whole during her career, including the achievement of a 50-state agreement on the Motor Vehicle Owners’ Right to Repair Act.

In 2012, Schmatz was honored with the prestigious Automotive Warehouse Distributors Association (AWDA) Automotive Leader of the Year award. In 2009, she received the Women Who Advance Excellence in Associations Award by the American Society of Association Executives and the Center for Association Leadership’s Greater Washington Network. In 2006, she received the SEMA Businesswomen’s Network Woman of the Year in addition to other recognitions such as the Martin Fromm Lifetime Achievement Award from AWDA, the Aftermarket Woman of the Year Award from the Women’s Board and the Distinguished Woman’s Award from Northwood University.