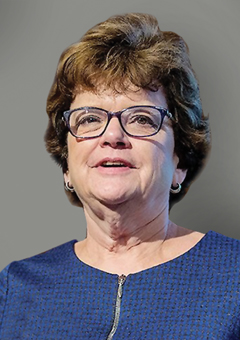 Whether during her time as a poverty lawyer in Louisiana, or in her role today representing motor vehicle suppliers on Capitol Hill, Ann Wilson, Senior VP of Government Affairs for MEMA, says she’s always liked dealing with real problems in need of a solution. “People present a problem, and you try to figure out a solution to it. I like the pace of it. You’re confronted every day with different kinds of challenges,” Wilson says.

There have been plenty of real problems Wilson has helped to solve for vehicle manufacturers over the past three decades. Two in particular she’s most proud of:  “One is during the bankruptcies. MEMA worked really hard with both our aftermarket manufacturers and our original-equipment manufacturers to protect jobs. We really worked hard for members of Congress to understand these jobs were supplier jobs located all over the country, and that sometimes there were 50 to 150 people in a manufacturing facility, but they may be the largest employer in that county. The wealth and the economic health of that county in that state depends on jobs like that. I’m also really proud of what we did under USMCA, particularly for the aftermarket, because negotiators hadn’t considered how the aftermarket was going to fit in there.”

Thinking about the high level of change we have all experienced in the past year, Wilson says its good to get uncomfortable. “I think we all have to embrace change, be willing to lean into new opportunities and sometimes learn things that are uncomfortable,” she says. “If we don’t continually push ourselves, then at the end of the day, we’re not going to have taken full advantage of all of the changes in front of us.”