VAN BUREN TOWNSHIP, Mich. — The board of directors of Visteon Corp. has elected President and CEO Donald Stebbins to the additional position of chairman of the board, effective Dec. 1. Stebbins succeeds Michael Johnston, who will retire as executive chairman Nov. 30, after eight years in senior leadership positions with the global automotive supplier. 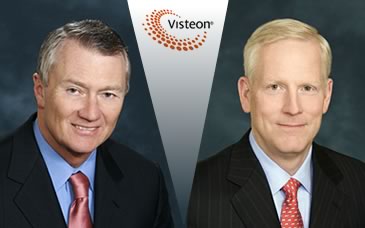 Stebbins, 50, joined Visteon in 2005 as president and chief operating officer, and was elevated to CEO by the board on June 1. He has more than 20 years of leadership experience in global operations and finance, including 13 years in senior leadership positions with Lear Corp. before joining Visteon. His election as chairman is aligned with Visteon’s long-term executive succession planning process.

"Don Stebbins has the experience, drive and foresight to lead through tough economic times and steer Visteon into the future," Johnston said. "Don has done an excellent job leading the organization and spearheading the execution of our restructuring plan. His commitment to operational excellence has helped improve Visteon’s cost structure, expand our capabilities in growth markets such as Asia Pacific, and enhance performance in areas ranging from product quality to employee safety."

Stebbins said: "I look forward to continuing Visteon’s transformation, and capitalizing on our talented workforce and global capabilities to deliver on our commitments to customers, shareholders and employees."

Johnston, 61, joined Visteon in September 2000 as chief operating officer and president, and was elected CEO in June 2004. He became chairman and CEO in June 2005. He has served as executive chairman since June 1, when Stebbins was elected CEO as part of a planned transition. Johnston is credited with guiding Visteon from a North America-focused components supplier that was heavily dependent on one automaker, to a global engineering and manufacturing company with a focused product portfolio and a diversified customer base. He has served on Visteon’s board of directors since April 2002 and will leave the board upon his retirement.

"The board expresses its appreciation and gratitude to Mike Johnston for his leadership and steadfast commitment to positioning Visteon for success in an increasingly competitive global market," said William H. Gray III, chairman of the corporate governance and nominating committee of Visteon’s board of directors. "Visteon took a number of strategic steps under Mike’s leadership that have provided a critical foundation for the company’s long-term future."

Stebbins has a bachelor’s degree from Miami University in Oxford, Ohio, where he is a member of the Business Advisory Council. He holds a master’s degree in business administration from the University of Michigan. He has served on Visteon’s board of directors since December 2006. He is a member of the board of directors of WABCO Holdings Inc. and the board of trustees of Detroit Country Day School.