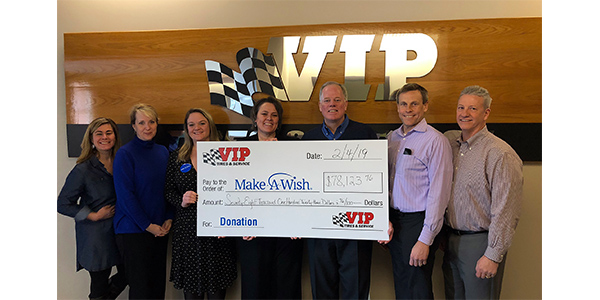 The funds raised will help make wishes come true for children in Northern New England who have life-threatening medical conditions.

VIP Tires & Service, a provider of retail tire installation and professional automotive services in Northern New England, announced it is donating $78,123.76 to Make-A-Wish. The funds were raised during the company’s annual holiday Season of Wishes Campaign at its 58 store locations. Since 2007, VIP has raised more than $483,000 for Make-A-Wish through its annual fundraising effort.

VIP encourages employees and customers to make individual donations and then matches the amount 100 percent. The company’s 58 VIP stores raised $39,061.88, and with the VIP match, $78,123.76 was presented to Make-A-Wish on Monday, Feb. 4 at the company’s headquarters in Auburn, Maine.

The VIP 2018 Season of Wishes Campaign raised 40 percent more funds over the previous year, noted John Quirk, VIP’s chairman and CEO. “I attribute the increase to a phenomenal commitment to the cause by our store teams, plus a little friendly competition between all of our locations. This year was also so successful because Make-A-Wish had wish recipients visit our stores and tell their stories, and that helped to create a special link between the fundraising effort and those who benefit,” said Quirk. “It really inspired our employees and customers to get involved.”

Funds raised in each state will benefit their local state Make-A-Wish chapters:

Kate Vickery, executive director of Make-A-Wish Maine, who accepted the donation said, “The results of this year’s campaign are just incredible! The funds raised are indicative of the continued commitment and heartfelt dedication that the employees and leadership at VIP have to making life-changing wishes come true for the kids and families that we serve. Their efforts are truly making a difference in communities, not just here in Maine, but throughout New England and we couldn’t be more grateful for their continued partnership.”

Make-A-Wish grants wishes to critically ill children all across the country. The average cash cost to grant a single wish in Maine is about $7,000, and the funds that support the wish granting effort in each state are raised through campaigns like the one VIP Tires & Service holds each holiday season. Wishes range from trips to theme parks, meeting a favorite athlete or celebrity, attending a major sporting event or concert, receiving a computer, tree house, or shopping spree.

“Helping grant wishes for these children is extremely meaningful and gives them something positive to look forward to,” said Quirk. “We would like to thank our generous employees and customers for helping raise these funds that will bring much-deserved happiness to the lives of children and young people facing life-threatening conditions.”

Advertisement
In this article:Philanthropy, VIP Tires
Print
Up Next: