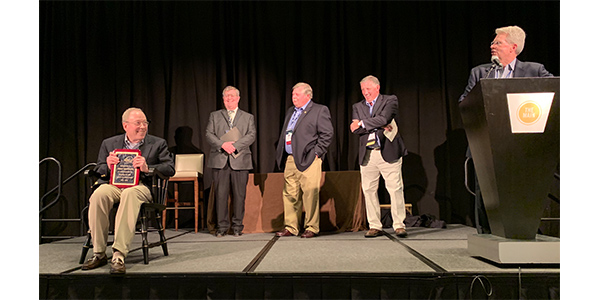 As part of his recognition, Westhafer was presented with a handcrafted black chair, embellished with the VAA logo in gold. It was on this chair, on stage, where he sat to receive recognition and roasting by some of his closest industry friends.

On April 13, the Virginia Automotive Association (VAA) paid tribute to one of its outstanding members, Terry Westhafer, bestowing upon him the VAA Lifetime Achievement Award, the first of its kind for the association.

The dinner celebration took place in Norfolk, Virginia, part of the three-day VAA 2019 Convention & Trade Expo. The roast-style recognition paid fitting tribute to Westhafer, previously inducted into the Tire Industry Association Hall of Fame, for his decades of involvement and impact on behalf of his industry within the state of Virginia. He served on the VAA board of directors for 43 years, from 1974 to 1996, and again from 1998 until today. He also served as the association’s president in 1978.

“In 1994, Terry Westhafer was recognized with the association’s highest honor, the distinguished member award,” said VAA Executive Director Steve Akridge in his remarks. “He recently sold his business, Central Tire in Verona, which had been in his family for 74 years. Terry, being a part of an organization for this many years certainly deserves a very special recognition, so we present to you tonight, the first ever Virginia Automotive Association Lifetime Achievement Award.”

As part of his recognition, Westhafer was presented with a handcrafted black chair, embellished with the VAA logo in gold. It was on this chair, on stage, where he sat to receive recognition and roasting by some of his closest industry friends.

Following Akridge’s remarks, Roy Littlefield, CEO of the Tire Industry Association, took the stage to honor his longtime friend. Littlefield reflected on their 40 years of working together on numerous legislative and association issues, sharing anecdotes on their work on tire recycling, retreading and other issues of impact where Westhafer played an essential role in advancing the industry. He presented him with his remarks in a large commemorative frame, entitled “A Tribute to a Tire Industry Giant – Terry Westhafer.”

VAA President John Kline shared his stories of “inheriting” the Legislative Chairman job from Terry years ago. “Terry came by my office and dropped off several binders about a foot thick, and said … Good luck.”

Following these stories, Westhafer recognized his family, who were all in attendance, particularly his wife Patty, and thanked all those he served with on industry issues over the years. He also reflected on his decades of service.

“There’s a lot that you put into it, and there’s a lot that comes out,” shared Westhafer about association involvement. “In my case, I can honestly say that I’ve put some time in, but the benefit that I’ve gotten from it personally, the benefits that it had in improving our business, and what it meant for the family far exceeded what I was putting in.”

During his six decades in the tire business, Westhafer devoted himself to serving the industry and helping guide its direction. He served as an active participant and leader of a number of groups, including the Tire Industry Association (TIA), the American Retreaders Association, where he served as president, the International Tire and Rubber Association, the Tire Retread Information Bureau and the Virginia Automotive Association. He also was very active in state and federal study committees on a number of issues relating to tires, retreading and including scrap tire policy.

Though retiring from the tire industry, Westhafer plans to continue in leadership roles at his church and as a founding director and chairman of Frontier Community Bank in Waynesboro, Virginia.

HDMA, MacKay & Company To Present Coronavirus Webinar
Connect with us