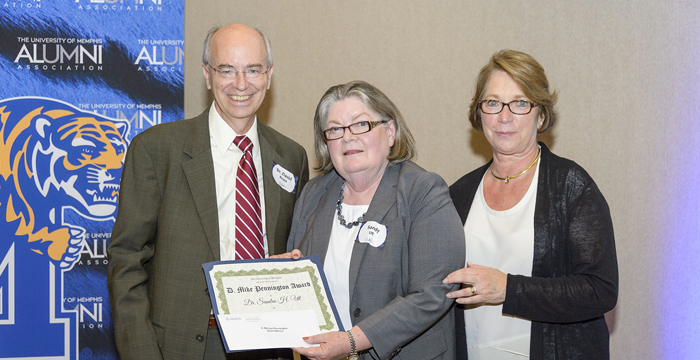 Pennington, who graduated from the University of Memphis in 1972, passed away unexpectedly last December. Honored with numerous awards during his lifetime, Pennington spent 25 years in corporate communications and 13 years as a business magazine journalist, editor and photographer, primarily in trucking and affiliated industries. 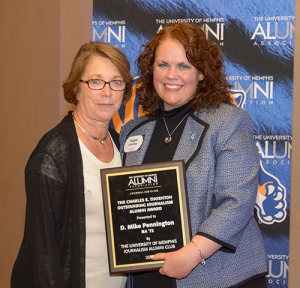 The University of Memphis Journalism Alumni Club has posthumously awarded its Charles E. Thornton Award to longtime trucking industry journalist and communication professional D. Michael Pennington, in honor of the extraordinary impact he had in his field, the trucking industry and his community.

Pennington, who graduated from the University of Memphis in 1972, passed away unexpectedly last December. Honored with numerous awards during his lifetime, Pennington spent 25 years in corporate communications and 13 years as a business magazine journalist, editor and photographer, primarily in trucking and affiliated industries. After his corporate life, he established PenNotes LLC to continue his client counseling and his involvement in the industry. His client list included Meritor Inc. (formerly Rockwell Automotive), Meritor WABCO, Maxion Wheels and Cummins Filtration.

Highly respected in his field, Pennington devoted his time to many organizations, including the American Trucking Association (ATA), Act 1 (the Allied Committee for the Trucking Industry), Trucker Buddy International, the Truck Writers of North America and numerous industry projects for Heavy Duty Aftermarket Week and New Aftermarket Leaders of Tomorrow. 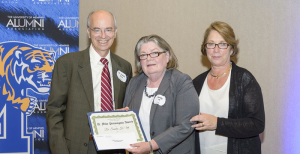 Also announced at the awards dinner was the first recipient of the mentoring award created in his honor by the University of Memphis with the support of Pennington’s family and friends. Dr. Sandy Utt was the inaugural recipient of the D. Mike Pennington Award for Outstanding Mentoring in the Department of Journalism. Having joined the university as an advertising professor in 1984, Dr. Utt serves as assistant chair of the department and advises all students entering the department. Her nomination by students cited her down-to-earth, approachable style; her penchant for guiding and challenging students to do their best and her ability to talk to students on their own level.

The award was established earlier this year as both the first-ever mentoring award in the university’s College of Communication and Fine Arts and the first faculty award in Journalism. Created to honor Pennington’s dedication to helping others and his loyalty to his alma mater, the D. Mike Pennington Award for Outstanding Mentoring will annually recognize a University of Memphis Journalism faculty member who has been an exemplary guide to students during their learning experience. Current students, faculty and alumni may nominate faculty for this award.

Contributions to the Pennington Award may be made online at memphis.edu/give. Select “I would like to give to a fund not listed here,” which then provides a line to enter “Mike Pennington Award.” Checks made payable to the University of Memphis Foundation should be mailed to Department 238, The UofM Foundation, P.O. Box 1000, Memphis, TN 38148.