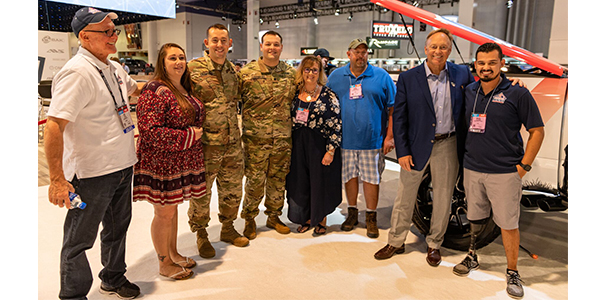 The event took place in the Truck Hero booth, with a custom-wrapped 2019 Ford F-150 Building Homes for Heroes (BHH) themed build as the backdrop. Sean Marks, executive VP of marketing, kicked off the ceremony by welcoming the Crawford family, BHH guests, members of the media and the Truck Hero team. Andy Pujol, BHH founder and CEO, followed to share the catalyst that propelled him into action to create Building Homes for Heroes, the terrorist attacks of Sept. 11, 2001. Previous BHH home recipient Army Specialist Greg Caron took the floor to give his personal testimony, as well as do the honors of making the surprise announcement.

Sergeant Crawford joined the Army directly after high school in 1987 because “he wanted to be a part of something bigger than himself and serve his country.” Crawford re-enlisted following the Sept. 11, 2001 terrorist attacks, because “he knew it was his duty to put back on the uniform and fight for his country’s freedom.” During a mission, Sergeant Crawford suffered injuries when a sniper’s bullet ricocheted off his helmet into the windshield of his vehicle sending glass and shrapnel into his eyes and face. This is the first time Crawford would earn the Purple Heart. Less than two months later, Sergeant Crawford was shot in the chest by enemy insurgents and would spend the next days, weeks and months fighting for his life and rehabilitating. For his service to his country, Sergeant Crawford received a second Purple Heart, and is a highly decorated veteran receiving the Army Commendation Medal, Army Achievement Medal, National Defense Service Medal and many more. Sergeant Crawford’s sons, Cyler and Dakota, are following closely in their father’s footsteps, and are currently on active-duty in the United States Army.

Truck Hero feels a strong connection to the Nation’s military service members and employs many active and veteran members across the organization. UnderCover Truck Bed Covers, based in Springfield, Missouri, began working with Building Homes for Heroes almost from its inception. What started as small donations and sponsoring a hole at the annual Building Homes for Heroes golf outing transformed into an official corporate-wide commitment in August 2017. Building Homes for Heroes has big goals, and Truck Hero is steadfast in helping to achieve them. To date, BHH has gifted 178 mortgage-free homes, with a goal of gifting 200 by the end of 2019 and 500 by 2025.

Advertisement
In this article:Truck Hero
Print
Up Next:

Pirelli Celebrates 60th Anniversary Of Its BS3: The Tire That Came With A Winter Coat