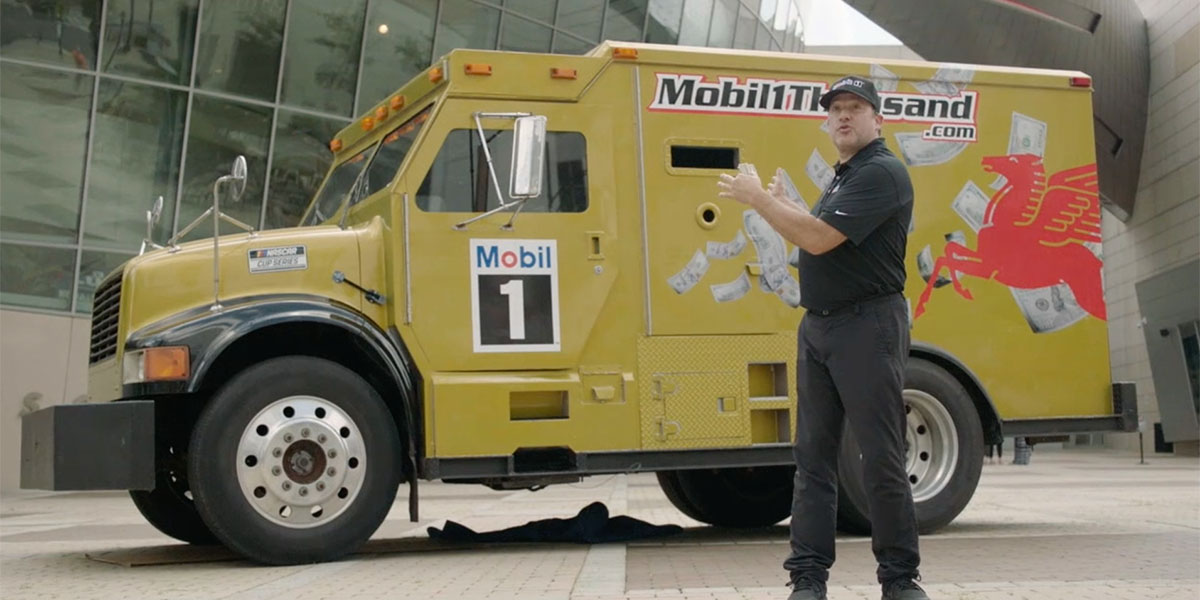 The armored ‘Mobil 1 Thousand Money Truck’ Stewart is driving will give NASCAR fans even more opportunities to win cash.

NASCAR Hall of Famer Tony Stewart took to the streets of Charlotte, North Carolina, in a Mobil 1-branded armored truck to promote the Mobil 1 Thousand sweepstakes, which will give NASCAR fans even more opportunities to win cash during the NASCAR Cup Series Playoffs.

The armored truck Stewart drove, nicknamed the “Mobil 1 Thousand Money Truck,” mirrored the Mobil 1 Thousand paint scheme Kevin Harvick raced earlier this year at Circuit of the Americas in Austin, Texas. Stewart, three-time NASCAR Cup Champion and co-owner of Stewart-Haas Racing (SHR), surprised unsuspecting fans with the one-of-a-kind vehicle and even made it rain dollar bills, firing off a pair of money guns outside the NASCAR Hall of Fame.

The Mobil 1 brand, the Official Motor Oil of NASCAR, launched the Mobil 1 Thousand sweepstakes earlier this year, giving $1,000 or more to fans each time a driver running Mobil 1 lubricant technology wins any NASCAR Cup Series race. So far $15,000 has been awarded and the brand has announced that the prize totals will increase during the playoffs, giving fans not only more opportunities to win but the opportunity to win more.

“Throughout my partnership with my good friends at Mobil 1, they’ve had me drive some crazy things. I mean, anyone remember the tank? So, it’s been fun to continue that tradition here,” Stewart said. “What’s so special about this promotion is that Mobil 1 is rewarding fans in a way that really no one else can, as both a league sponsor and technology provider for so many NASCAR teams. The chance at weekly cash is exciting for everyone, and the bonuses they’ve added all season, including special prizes to celebrate 10 years as an SHR partner, make signing up a no-brainer.”

And the bonuses continue. At the start of the playoffs and at each cut-off race, an extra prize will be up for grabs: $1,000 for every Mobil 1 driver advancing to the next round, awarded as a lump sum. Additionally, if a Mobil 1 driver wins the NASCAR Cup Series Championship, one lucky winner will walk away with $15,000. Full prizing details and means of entry can be found on mobil1thousand.com.

“The Mobil 1 Thousand sweepstakes is about celebrating drivers, teams, and wins right along with the fans that make NASCAR such an incredible sport,” said Bryce Huschka, North America Consumer Marketing Manager for ExxonMobil. “Now, with the playoffs right around the corner, we are thrilled to ramp it up and give fans the opportunity to win even bigger prizes as the stakes get higher. Whenever you see a Mobil 1 decal on track, you can be sure that our technology is in that vehicle, and it’s both a privilege and a responsibility that we don’t take lightly.”

To check out footage of Smoke surprising fans in the Mobil 1 Thousand Money Truck in Charlotte, head here or follow @Mobil1 on Facebook, Instagram or Twitter. For full information and updates on the Mobil 1 Thousand sweepstakes, including all plus-ups to playoff races, visit mobil1thousand.com.

Advertisement
In this article:Giveaways, Mobil 1, Stewart Haas Racing, Tony Stewart
Print
Up Next:

Events: Mitchell 1 To Offer Shops Ways To ‘Electrify Your Business’ At AAPEX And SEMA