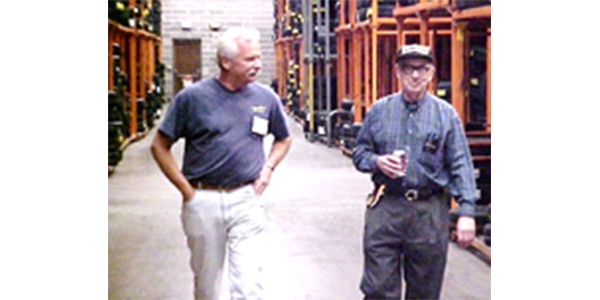 Lesieur streamlined his family’s business into a tire sales and service only enterprise, which blossomed into one of New England’s largest tire retail and wholesale suppliers during his years at the helm. He loved the tire and automotive industry.

Lesieur was born on March 13, 1929, the son of the late Leo H. Lesieur and Jeanette Maynard Lesieur. He attended the University of New Hampshire in 1951 and enrolled in the ROTC program, where he served in the U.S. Army as a 2nd Lieutenant stationed at Fort Bliss (El Paso, Texas), Fort Lewis (Seattle, Washington) and served time in Korea during the U.S. conflict. Once his duties in the Army were complete, he and his wife Eleanor (Ele) returned to Nashua and raised their four children Steven, Mark, Cheryl and Larry in their north end home.

In Nashua, Lesieur was employed by Maynard and Lesieur Inc., a family tire business founded on June 1, 1928, by his father Leo and his grandfather Emile “Pop” Maynard. It began as a gasoline and oil change garage and expanded into repairs and tire sales. After his father’s retirement, Roland streamlined the business into a tire sales and service only enterprise, which blossomed into one of New England’s largest tire retail and wholesale suppliers during his years at the helm. He loved the tire and automotive industry.

“Roland was a giant in the industry. He was my mentor and a dear friend,” said Roy Littlefield, CEO of the Tire Industry Association. “He was a driving force in NTDRA’s early legislative efforts, and spent more time than any other tire dealer on Capitol Hill for the successful passage of voluntary tire registration. He was always a leader in both the New England association and the national association. He will be missed, but never forgotten.”

Roland was predeceased by his wife Ele, his brother Leo R. “Mike” Lesieur, and daughter- in- law Laura Jean Lesieur. He is survived by his three sons, Steven and wife Carmen of Hudson, Mark of Londonderry, Larry of Nashua, and one daughter, Cheryl Lesieur Appelstein and her husband Charlie of Salem. His grandchildren Lynn Lesieur, Abbie Lesieur, Brian Lesieur and his wife Jennifer, Natalie Lesieur-Molak and her husband Nick, Erik Lesieur, Julie Appelstein, his great -granddaughter Ella and great-grandson Beau Lesieur recently born on 1/11/19. Roland is survived by his sisters Jacqueline Maynard, Madeleine Gingras, and his sister- in -law Elinor Lesieur, all of Nashua as well as many nieces and nephews.

In lieu of flowers, donations can be made to The Nashua Children’s Home, 125 Amherst St., Nashua 03064; Home Health and Hospice, 7 Executive Park Dr., Merrimack 03054 specifying use for the Community Hospice House; or a charity of your choice. Calling hours will be held from 4-7 p.m. on Feb. 22, at Davis Funeral Home on Lock St. in Nashua. Services will be held at 10 a.m. on Feb. 23 at St. Christopher Church on Manchester Street in Nashua.

Allison Transmission Adds Judy Altmaier To Board Of Directors