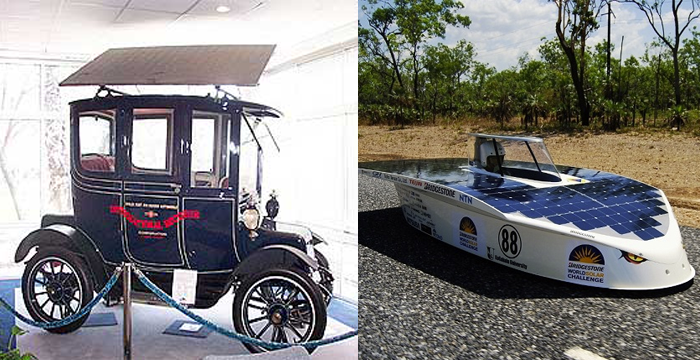 According to the U.S. Census Bureau, on this date in 1955, William G. Cobb of the General Motors Corp. demonstrated the world’s first solar-powered car. 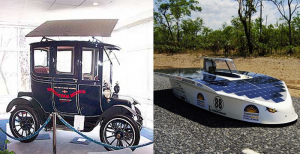 The comparison between 1955 and 2015: (Left) The solar car of 1955 was too tiny to drive; (Right) While solar cars are still being designed, Bridgestone sponsors the World Solar Challenge. Photo credit: doitnow.co.za

The 1950s may be recalled for many now-quaint things, but it was also a decade with antecedents for our current technological pursuits. According to the U.S. Census Bureau, on this date in 1955, William G. Cobb of the General Motors Corp. demonstrated the world’s first solar-powered car. This vehicle didn’t take the world by storm because it was a model a mere 15 inches long. The first solar powered car that could actually be driven was unveiled in 1962; a 1912 Baker electric car was fitted with nearly 11,000 individual solar cells on the roof to power the vehicle. Now, more than 50 years on, a fully practical solar-powered car remains a goal, but manufacturing automobiles, mostly powered by internal combustion, is a nearly $110 billion a year business in the U.S.

To read more on this historic moment in auto history, click here.

Rick Keister Joins The Board Of Collision Diagnostic Services

NASCAR CEO And Wife Aim To Inspire Others With $1M Donation

This Date In History: The Solar Roller