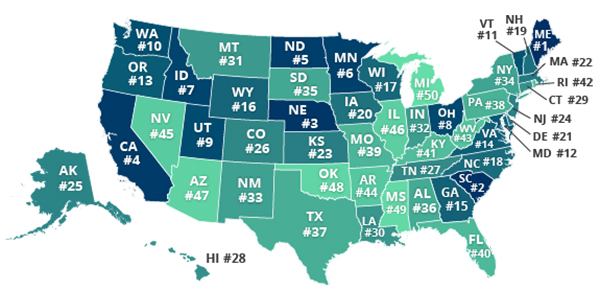 New annual study from QuoteWizard ranks the best and worst driving states in the nation for the past year.

With 2019 now in full swing, QuoteWizard, an online insurance comparison marketplace, has released a new proprietary study ranking the best and worst driving states in the nation for the past year.

To compile the data, QuoteWizard sampled incident data (with more than 2 million data points) from drivers who used its services and linearly extrapolated it to Federal Highway Administration fatality data. To quantify overall driver standards for comparison, QuoteWizard then weighted various incident counts for each state with its frequency. The final rankings are a sum of weighted means, calculated from total accidents, speeding tickets, DUI, citations and fatalities.

This year’s study provides updated rankings on all 50 states. Among its findings, QuoteWizard’s annual research found that these are the nation’s five worst driving states:

On the other hand, these are the five best driving states:

In addition to ranking all 50 states, the study also examines differences in driving skills along political lines.

“Anyone who has ever gone on a cross-country road trip knows that every state has its share of bad drivers,” said Adam Johnson, QuoteWizard content manager. “But, to put it simply, some states are just worse than others. We analyzed millions of data points on America’s drivers to find which states have the best or worst drivers, and the results are both surprising and interesting.”

Advertisement
In this article:Best and Worst Driving States
Print
Up Next:

The Year’s Best And Worst Driving States In The U.S.