The study is designed to capture the following factors in the DIFM channel:
• Recent business trends and the corresponding drivers
• Major inflection points in sales trends
• Expectations for demand over the next three months
• Major changes in consumer behavior
• Insight into market share trends and the relative rate at which installers are switching wholesale parts suppliers

For this week’s “The Pulse” feature, we look at some of the findings of the Northcoast Independent Automotive Repair Garage Survey for May 2011.

“According to our survey results, current demand trends, relative to the prior year, rebounded in May as sales comparisons eased,” Northcoast stated in the survey report. “In addition, the stronger demand trends were accompanied by a more optimistic outlook for business expectations over the next three months, which helped fuel a 26.2 percent sequential increase in our Northcoast Research Mechanic Index. That said, May’s reading of 63.7 was still the second lowest reading of 2011 despite the recovery. We believe the sequential improvement in the aggregate index reflects the easing sales comparisons, and the benefits that falling gasoline prices in June had on our respondents’ outlook for future demand trends."

Negative Maintenance Behavior Continues
“One of the most persistent trends that we have noticed since we began conducting our survey is the large number of respondents that indicate that the economic downturn had a significant impact on the way consumers approach non-essential procedures. Over the course of our recent surveys, the number of people that have been deferring maintenance had been moderating, particularly since August 2010, following a spike in deferred maintenance behavior. In conjunction with the reduction of deferred maintenance, the number of mechanics citing an increase in preventative maintenance was also rising. The combination of the two factors was a very bullish sign for the broader automotive aftermarket, as many survey respondents indicated at the beginning of the year that these trends would be essential for above average sales growth to occur in 2011. However, in April these favorable trends reversed as the number of respondents reporting a decline in the amount of deferred maintenance increased in tandem with a decrease in the number of consumers performing more preventative maintenance. 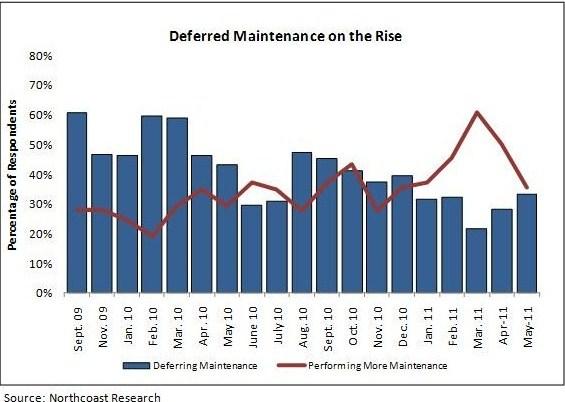 “As illustrated in the previous chart, the negative behavior cited in April occurred again in May as 33.3 percent of respondents indicated that their customer base was deferring more maintenance relative to the historic norm, versus 28 percent in April and 21.6 percent in March. Additionally, the number of respondents reporting that their customers were being more attentive to preventative work fell to 35.3 percent, which is down significantly from the 50 percent and 60.8 percent levels that we recorded in April and March, respectively. While May is only the second month to experience these deteriorating trends, and deferred maintenance levels remain healthier than last May, we will continue to monitor this metric closely as further weakness would be troubling for the industry given that sales comparisons really stiffen in the next three months.

More Optimistic Outlook Returns
“In addition to the rise in the Current Sales Index, the Three-Month Outlook Index jumped 30.7 percent to 70.6, which contributed 62.7 percent of the increase in the composite index. Although we are accustomed to the technicians in our survey being optimistic when attempting to prognosticate future business trends, we were somewhat surprised to see the benchmark rally as much as it did following the significant drop in April. In addition to seeing their sales trends rebound from a tough April, the mechanics we spoke with were encouraged by the solid start to June and the receding prices at the pumps. Anecdotally, some of the technicians we spoke with also indicated that the temperatures became very warm over the past couple of weeks, which helped spark demand for parts and maintenance tied to cooling systems. In our opinion, the break in gas prices during June had the biggest impact on the recovery in the respondents’ optimism toward future business trends.

"All in, we anticipate that the Three-Month Outlook Index will remain volatile in the coming months as we expect demand trends to remain choppy given the stiffening sales comparisons, and vacillating commodity prices, especially gasoline prices at the pumps, both of which should reduce the transparency of future demand (i.e. reduced visibility should increase the variability in sales projections).

"While the number of 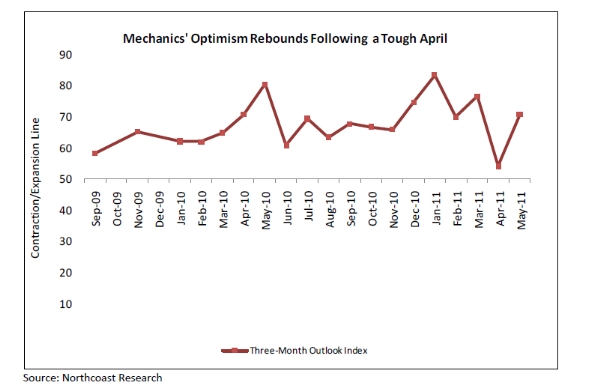 mechanics in the May survey that are expecting year-over-year business gains to occur in the next three months was more in line with the figures we were seeing prior to April, we were surprised by the sequential increase in the amount of negative anecdotal comments we heard regarding the health of the local economies and rising commodity costs. This troubles us because we do not think demand for automotive repair and replacement parts and accessories would be as resilient in another slowdown (or a more pronounced slowdown), as many investors think."

ABOUT NORTHCOAST RESEARCH
Northcoast Research is an independent, full-service institutional equity research and trading firm headquartered in Cleveland, Ohio. Founded in 2009, the company’s mission is to add value in each phase of the investment process by aligning the company’s goals with those of its clients. Northcoast aims to provide unbiased, proprietary and actionable fundamental research on select industry verticals and companies, underpinned by comprehensive channel checks across a broad array of industry contacts. The company’s core research verticals are Consumer, Health care, Industrial and Business Services.

The Pulse: Northcoast Research Miles Driven Index for May