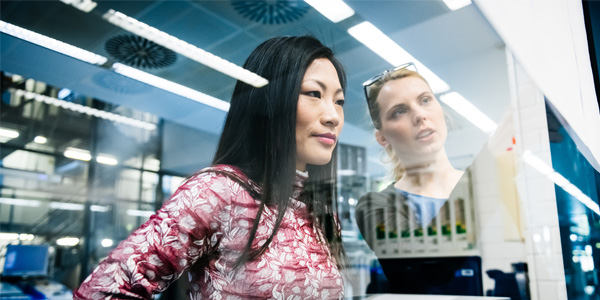 The first Girls’ Lounge was founded in 2013 when marketing executive Shelley Zalis invited some girlfriends to join her at the male-dominated Consumer Electronics Show (CES) and suggested they “invite their friends.” 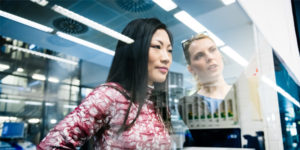 Recently, when Herman Trend Alert author Joyce Gioia attended SXSW, she happened upon a refuge called “The Girls’ Lounge.” Though noisy and filled with frenetic activity, the installation was a haven for women looking to escape the crowds and stress of the larger venue.

The first Girls’ Lounge was founded in 2013 when marketing executive Shelley Zalis invited some girlfriends to join her at the male-dominated Consumer Electronics Show (CES) and suggested they “invite their friends.”

Back in the late 1970s, Gioia experienced this male domination firsthand as the publisher of “The Complete Buyers Guide to Stereo/Hi-Fi Equipment.” At that time, Gioia was one of the only women in the industry. Almost 30 years later, about 50 women ended up walking the CES floor together. Zalis calls it a “heartbeat moment where the minority felt like the majority.” She calls it “the power of the pack.”

This year, there were, or will be, Girls Lounges at many major conferences including Davos, ARF ConsumerXScience, Cannes and Advertising Week.

A rich environment with panels

Sponsored by a “who’s who” of big brands, including Pepsico, L’Oreal, Unilever, Google, facebook, NBCUniversal, AT&T, UBS, The Atlantic Magazine, The New York Times and JP Morgan Chase, the lounges feature all-day panel programming, giving successful women executives in corporations, non-profits and government an opportunity to share their stories about what worked and what didn’t. These executives shared successes and failures in creating and leading their businesses, though it was often difficult to hear above the din of the room. There also was the opportunity to professionally update LinkedIn photos as well as free career and investment coaching. And Cinnabon offered mini-cinnamon buns along with iced coffee. (It’s highly successful group president of Focus Brands – including Cinnabon – Kat Cole was one of the panel speakers.) Moreover, there were vitamin, granola and other product samples from PureWow. But the Girl’s Lounges were only the beginning for Zalis.

From a gathering to a movement

What started as an informal gathering of women has turned into a movement that emphasizes collaboration and mentorship to activate real change. In addition to the Girls’ Lounge, Zalis’ company The Female Quotient also offers research and strategy solutions for forward-thinking corporations to give companies and leaders the tools they need to design the culture they want. Their mission is to advance gender equality in the workplace. Studies have shown that when women are given leadership responsibilities, typically profitability gets better.

Zalis is expanding Girls’ Lounges at large venues and major conferences across the planet. This kind of support for women and their initiatives has the potential for materially changing the global landscape of our culture for the better.

Advertisement
In this article:Herman Trend Alert, women in auto care
Print
Up Next:

The Herman Trend Alert: Creating A Place For Women To Thrive