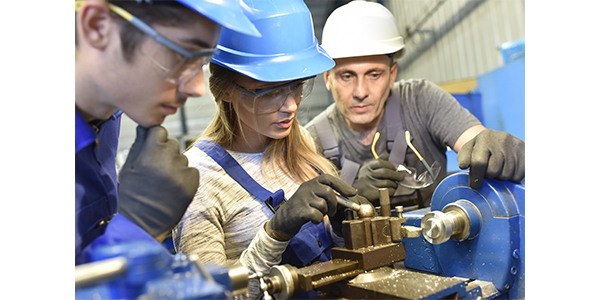 Now, due in part to the lowest unemployment rate in 50 years, U.S. cities are embracing apprenticeships.

I have long believed that embracing the concept of apprenticeships was a good solution to the global labor shortages. In Europe and elsewhere, they have always been popular – particularly in Germany. Years ago, when I spoke in Alaska, I met a representative from the U.S. government who was promoting apprenticeships in that state. There, it made a lot of sense, because low-income people could agree to serve in remote areas and become nursing assistants and even registered nurses by agreeing to multi-year contracts in out-of-the-way places like Barrow, Alaska, isolated for months at a time by seasonal ice and snow.

Finally, the United States is waking up
Now, due in part to the lowest unemployment rate in 50 years, U.S. cities like New York and counties like Elkhart County in Indiana, the U.S. center for manufacturing recreational vehicles this fall both launched youth apprenticeship programs to respond to local shortages of skilled labor. The new initiatives are based on a three-year proven program launched by the nonprofit CareerWise Colorado, based in Denver.

Starting with younger people
Instead of following the traditional U.S. model – training people in their 20s for the trades – this iteration engages high school juniors to work part-time in industries like banking, healthcare, technology, consulting and advanced manufacturing. Over the course of three years, this innovative program combines earning a salary while learning a skill, finishing high school, and gaining college credits. Students are able to finish with an associate’s degree or a professional certificate.

Avoiding the high costs of college
Among the many reasons why apprenticeships are so appealing is the ever- and exponentially increasing cost of a college education. According to The College Board, the average annual cost of tuition and fees at a four-year private college more than doubled over the past 10 years to $35,800 – not including room and board. Moreover, according to the Federal Reserve, seven out of 10 college students graduate with debt averaging $37,172. On top of that, according to the U.S. Department of Education, only 42 percent of students graduate college within four years. Likewise, the numbers are even worse for other segments: only 22 percent for black students and just 33 percent for Hispanic students.

Most students are simply not prepared
Sadly, civic leaders in the U.S. agree the educational system just is not preparing young people for the jobs that are available. There is a strong appetite among business leaders for something new and different to respond to the labor crisis. Those facts are why the executives brought the CareerWise model to New York City.

Clearly, a concept whose time has come
With an inability to find and recruit this win-win-win solution offers many benefits: Employees learn while they earn, and employers develop qualified employees who are predisposed to work for the organization once they graduate. Finally, the community wins because the program is graduating tax-paying citizens who will likely choose to stay and continue contributing to the economy. Expect to see more communities embracing apprenticeship programs in the near-term future and beyond.

Special thanks to Theresa Agovino, workplace editor at SHRM, for her coverage of this important topic.

Advertisement
In this article:apprenticeships, Herman Trend Alert
Print
Up Next:

The Herman Trend Alert: A Leap Forward for Autonomous Vehicles