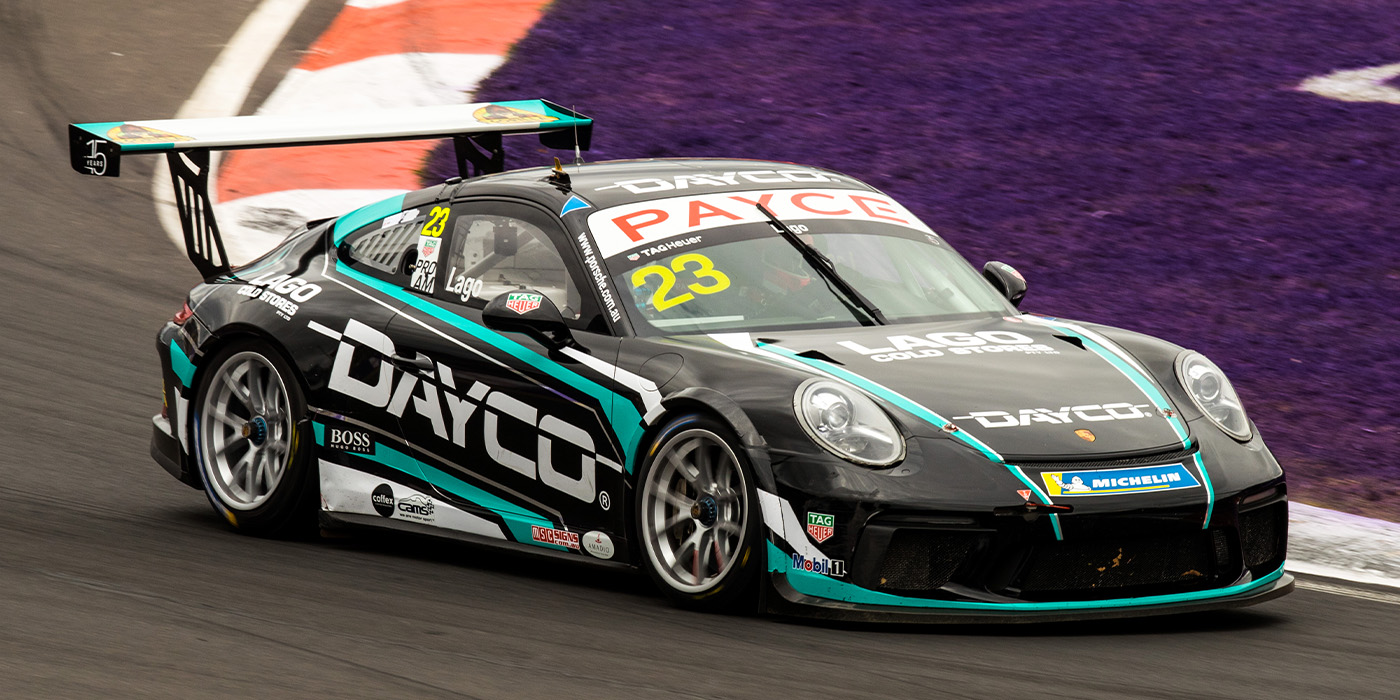 Dayco Australia will once again be a major player in the 2021 Porsche Carrera Cup Australia Championship with Lago Racing.

The renowned No. 23 black beauty will return for the planned eight round 2021 series of the world’s fastest one make championship with longtime Dayco Ambassadors and highly experienced racers David Russell and team owner/driver Roger Lago competing in both the Pro and Pro-Am categories throughout the season.

Porsche Carrera Cup Australia has been a popular addition to the Dayco Australia motorsport program over recent years, with the global company using Australian race imagery locally and worldwide across its automotive aftermarket marketing and promotional campaigns.

The 2021 Porsche Carrera Cup Championship features a number of exciting changes for the new season following the category’s heavily disrupted 2020 season due to the pandemic. Once again, all Carrera Cup races will be held in conjunction with major Supercar Championship events. The popular series plans to return to Western Australia under lights in September and heads across the Tasman to compete in New Zealand in November.

The opening round will be held at Melbourne’s Sandown Raceway from March 18-21, replacing the postponed Australian Formula One Grand Prix event, with the super-fast series racing through South Australia, Northern Queensland, New South Wales, Western Australia and New Zealand from March to December, including the spectacular Surfers Paradise Street Circuit as its grand final round.

According to David McClurg, Dayco Australia sales and marketing director, the 2021 Dayco motorsport program is shaping up to be one of the company’s best yet.

“After the pandemic disruption that totally decimated the Porsche Carrera Cup component of our motorsport marketing program last season, we are very excited about the new season ahead. We have a great car and two very accomplished drivers, a number of great events including a night race in WA and a visit to New Zealand, where we also have many Dayco customers,” McClurg stated.

“The Dayco Porsche Cup Car has become one of the most recognized cars in the field and these incredible racing cars have a truly global appeal. This combined with our continued Supercars involvement, our TCR car sponsorship and our grass roots support of the Monash Motorsport Formula SAE team, forms an excellent motorsport marketing package for the new year ahead,” he added.

Advertisement
In this article:Dayco Australia, motorsports partnerships
Print
Up Next:

The Dayco Porsche Returns To The Track With Lago Racing