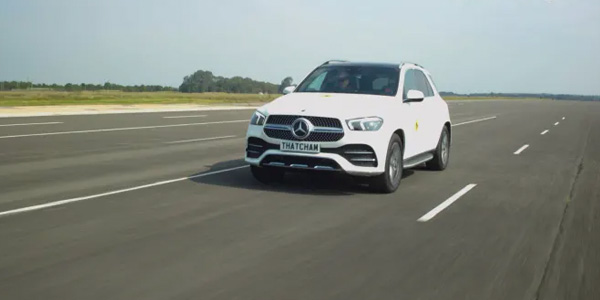 The Mercedes GLE emerged as the strongest performer across all three performance criteria.

Thatcham Research and Euro NCAP have launched what they’re touting as the world’s first grading system for self-driving vehicles “to give motorists the crucial insight they need to understand how to use today’s assisted-driving technology safely.”

“Many new vehicles feature assisted-driving systems that have been developed to support the driver. However, there is significant potential for carmakers to overstate the capability of their current assisted driving technology and for motorists to misuse it,” Thatcham Research said in a news release. “Confusion around the limitations of these systems has resulted in serious road collisions – and deaths.”

Thatcham Research and Euro NCAP have stepped in to bring much-needed clarity and understanding, via the new Assisted Driving Grading.

“The systems that are currently allowed on our roads are there to assist the driver – but do not replace them,” Matthew Avery, Thatcham Research’s director of research, explained. “Unfortunately, there are motorists that believe they can purchase a self-driving car today. This is a dangerous misconception that sees too much control handed to vehicles that are not ready to cope with all situations.

“Clarity is therefore required to make sure drivers understand the capability and performance of current assisted systems. It’s crucial today’s technology is adopted safely before we take the next step on the road to automation. There are safety and insurance implications that must be considered seriously.”

How effective are the speed assistance, steering assistance and adaptive cruise-control systems that work together to control the vehicle’s speed and steering?

How well does the car protect the driver in an emergency? This could be a system failure, when the driver becomes unresponsive, or if the car is about to collide with another vehicle? What happens when there is a loss of sensor input?

They are then awarded an overall rating:

“The best systems strike a good balance between the amount of assistance they give to the driver and how much they do to ensure drivers are engaged and aware of their responsibilities behind the wheel,” Avery said.

The first batch of results inform consumers about the performance and limitations of ten currently available assisted driving systems. These systems combine automatic acceleration, lane keeping and braking to reduce driver fatigue on long journeys, offering steering support while maintaining a set speed and safe distance from the car in front.

However, some vehicles performed better than others when put in the testing spotlight.

The Mercedes GLE emerged as the strongest performer across all three performance criteria, while the BMW 3 Series was just two points behind. Both vehicles achieved a “very good” grading.

The Ford Kuga’s results showed a “good” grading is possible for a mid-class vehicle, thanks to its combination of vehicle assistance and safety back-up systems. The entry-level Renault Clio and Peugeot 2008 offer effective systems, but lack emergency-assist capability which would have boosted their grading, according

The Tesla Model 3 was top scorer in the Vehicle Assistance and Safety Back-Up assessments, but was the lowest scorer for Driver Engagement, resulting in a “moderate” grading.

“The first batch of results show some car makers have developed robust assisted driving systems and that’s good to see. But there are also significant gaps in capability on other vehicles,” Avery explained.

“For instance, the Tesla Model 3 was the best for vehicle assistance and safety back-up. But lost ground for over selling what its Autopilot system is capable of, while actively discouraging drivers from engaging when behind the wheel. “Tesla should however be recognized for its ability to update vehicles ‘over the air.’ Two years ago, it’s safety back-up results would not have been market leading. This unique capability has seen it move the safety game on, across its whole fleet of vehicles.”

Advertisement
In this article:adas, Self-Driving Vehicles
Print
Up Next: