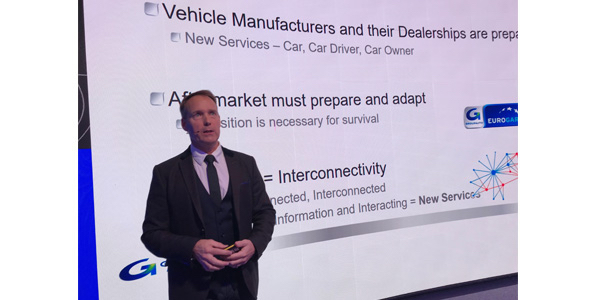 Robert Stevens, director of garage networks and technology at Groupauto International, described one possible scenario, during a Sept. 12 presentation at Automechanika Frankfurt.

By most accounts, business in the automotive aftermarket today is good. However, if independent repairers expect the customer of tomorrow to just waltz into their shops, they could be waiting a long time.

That’s because the customer of tomorrow will be driving a connected vehicle. And, unless OEMs agree to share the treasure trove of maintenance and operational data that connected vehicles generate, independent shops could find themselves at a competitive disadvantage.

Robert Stevens, director of garage networks and technology at Groupauto International, described one possible scenario, during a Sept. 12 presentation at Automechanika Frankfurt.

“The dashboard of their car is going to be saying to them, ‘Your car is due for service. The dealership has booked an appointment for you on Wednesday at 3 o’clock. Just click right here on your dashboard to accept the appointment.’

“They never come to us – they’ve been directed back to the dealership.”

Another challenge: Increasingly, the repair customer of the future will be part of a centrally managed fleet.

“The vehicle they’re driving – a leased vehicle – is on a central repair and maintenance contract with a different garage network,” Stevens said. “So [the independent shop doesn’t] ever get the chance to even look at the problem. It’s pre-assigned to someone else’s garage who’s doing business with the fleet.”

These changes are going to have “a huge impact” on the automotive aftermarket, Stevens asserted.

“We are suddenly going to see a decline in the number of cars that are coming to our independent aftermarket repair garage. We have to prepare for this. You have to realize that the dealerships are already preparing. They’re creating applications and services for the car, for the car driver, for the fleet manager – they’re doing this right now. The aftermarket must do the same thing or we simply will not be able to compete.”

That’s why Stevens asserted that the future of the aftermarket hinges on “interconnectivity.”

“Connected is not enough,” Stevens said. “I can have a connected car, and I can get a signal from it that it needs a service. But … we have to link that one piece of information to lots of other things in order to deliver a valuable service.”

There are two types of connected vehicles, Stevens explained: those that have been retrofitted with a telematics device, and those that come off the assembly line with an embedded telematics system.

In the future, the latter will become the norm. “You have to realize that the entire car parc is eventually going to transition to these connected cars.”

Groupauto, an international network of independent parts distributors and repair shops, offers a telematics device that can be retrofitted to vehicles. But the network aims to go beyond being merely connected. Stevens said the organization is in the process of developing a telematics system that enables users to order parts, interpret diagnostic trouble codes (DTCs) and even perform remote diagnostics.

Groupauto also has created a repair and maintenance system that captures live vehicle data for its fleet customers, allowing them to actively manage and monitor their fleets.

Stevens said he hopes to share the data with insurance providers and roadside-assistance companies, so fleets could qualify for discounts on their insurance premiums.

“This is our pathway to those connected cars,” Stevens said. “ … I have to create a service that’s good enough to compete with the vehicle manufacturers and their dealership networks and the services they’re going to provide. If we aren’t prepared to compete with those, we lose.”

To compete with dealerships in the age of connected vehicles, Stevens explained, independent repair shops need access to data such as:

However, new connected vehicles don’t provide any of that data to independent repairers.

“These connected cars with embedded systems send a huge amount of information, but only to the vehicle manufacturer,” Stevens said.

The OEMs know that independent shops need access to vehicle data to stay competitive, so they came up with a concept called “extended vehicle,” through which they provide some data to mechanics and other parties – for a price.

There are a number of problems with the concept, Stevens lamented.

“The first problem is simply the amount of data they will let us see,” he explained. “My car sends 7,000 lines of data. What they give us on extended vehicle is 77 information descriptions. It’s not even real data – it’s text. And of those 77, only 11 are related to repair and maintenance.”

On top of that, the data isn’t in real time. And the cost, Stevens asserted, is exorbitant.

“With extended vehicle, the vehicle owner has to pay to make the data available for himself, and then if we as the aftermarket want to provide a service, we have to pay for it as well. And the amount we have to pay for only getting 11 useful bits of information is ridiculous.”

Adding insult to injury, the OEMs can see which independent shops are working on their vehicles, and which vehicle owners are taking them there.

“I assure you they’re going to contact those vehicle owners and explain the error of their ways and why they should be coming back to the dealership for those services,” Stevens asserted. “And despite all of these problems, I’ve been in meetings with the vehicle manufacturers in the European Commission, and the vehicle manufacturers don’t understand why we’re not happy with this.”

FIGIEFA, the European federation of aftermarket distributors, is lobbying the European Commission to expand access to telematics data, just as the Auto Care Association is pushing U.S. regulators to do the same here. In the meantime, Stevens offered “three simple truths” for independent aftermarket shops and parts distributors.

He added: “We just have to push our way through it.”

Advertisement
In this article:Automechanika Frankfurt, connected car
Print
Up Next:

Telematics And The Future Of The Automotive Aftermarket: Why ‘Connected’ Isn’t Enough