There was a time when a “Jetsons”-like future seemed just a fantasy. Today, however, the space-age cartoon isn’t far off the mark, at least when it comes to the automotive industry. We may not be driving around in hovercrafts just yet, but with the latest advances in telematics, it doesn’t seem far-fetched.

There was a time when a “Jetsons”-like future seemed just a fantasy. Today, however, the space-age cartoon isn’t far off the mark, at least when it comes to the automotive industry. We may not be driving around in hovercrafts just yet, but with the latest advances in telematics, it doesn’t seem far-fetched.

As it stands now, telematics capabilities allow drivers to plug an address into a Global Positioning System (GPS) and easily drive to their destinations without the hassle of a paper map or handwritten directions. It can also tell you when you’re driving at a rate that achieves optimal fuel efficiency or when your vehicle veers out of its lane. It can warn you to anticipate a traffic jam ahead, and offer an alternate route to avoid it.

Vehicle telematics systems such as GM’s OnStar offer motorists a new level of safety and convenience never seen before in a vehicle. The system features automatic crash response, emergency services, hands-free calling and even, vehicle diagnostics. It is the latter that has the independent aftermarket most concerned. 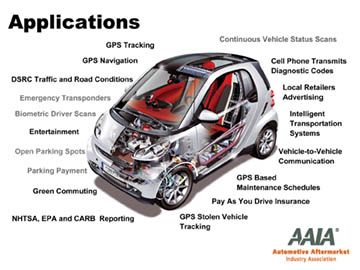 Many in the aftermarket fear that this “cradle-to-grave” connection the OE dealers now have to vehicle owners may be a threat to the independent aftermarket.

“The same technology that makes it easy to connect, also makes it easy to build fences,” said Derek Kaufman, during a presentation at the recent Aftermarket eForum in Chicago . “We know that OEMs are lobbying heavily against an open marketplace and that brings us to the whole issue of Right to Repair, because in fact it is in jeopardy.”

However, all is not lost, Kaufman adds.

A recent study on telematics conducted by Kaufman and his company C3 Network, Inc., on behalf of the Automotive Aftermarket Industry Association (AAIA), shows that there are currently approximately 280 million cars on the road that could use telematics updates.

Twenty-eight percent of the vehicles in the U.S. have monitored telematics in them today, and that number is expected to grow to about 40 percent of the cars by 2012. Non-monitored (monitored telematics include systems such as OnStar) aftermarket telematics currently make up about 7.25 percent, and is expected to grow to 30 percent. This segment will become the fastest portion of telematics in the industry, according to Kaufman’s research. Why? Because the aftermarket has the ability to bring p rod ucts to market faster than the OEMs.

“We have a very large market brewing here,” said Kaufman.

Research from the Telematics Research Group (TRG) shows that car sales are going to grow from $69 million to $76 million per year globally. However, Kaufman points out this growth will occur outside the U.S.

“All the growth is going to be in Asia and India , with sales in the U.S. and Western Europe flattening. And remember as you are developing telematics devices you are aiming them at less expensive, smaller cars, going forward,” said Kaufman. “So the names we’re talking about in the future aren’t necessarily Toyota and GM. They are Chery and Brilliance and Tata. … There are a lot of devices being developed for the Chinese market – very small cars and very inexpensive – but very telamatically ripe.”

The time to market for telematics favors the aftermarket, according to Kaufman’s research, which means, parts professionals must be proactive in their approach. This is an opportunity to create new revenue streams for those who are prepared. At this point, however, it is really a game of ‘wait and see’ for the parts distribution segment.

Richard Morgan , president and CEO of the Aftermarket Auto Parts Alliance, said that Alliance members aren’t making any specific plans just yet but they are keeping a close watch on the situation. “We don’t have a plan at this time. We are going to pay as close attention to it as we can and move where we think we need to move, but at this point we don’t quite know what to expect. We do know that the aftermarket is going to have to compete with the OE dealers. That is for sure.”

J.R. Bishop, director of marketing support for Federated Auto Parts, is well-versed in the threats and opportunities available in telematics. During the University of the Aftermarket Leadership 2.0 program, Bishop’s team selected telematics for its final research project. From that experience, Bishop says he’s learned that having strong technical resources is an important part of preparing for the future of telematics.

“Program groups with strong technical resources such as Federated are in position to capitalize on telematics as they gain momentum in the marketplace,” Bishop said. “Federated’s installer business management system will be our service provider’s link with their customer’s vehicles and will take full advantage of the marketing edge telematics provides.”

To get your own copy of AAIA’s Telematics Study, go to: www.aftermarket.org.