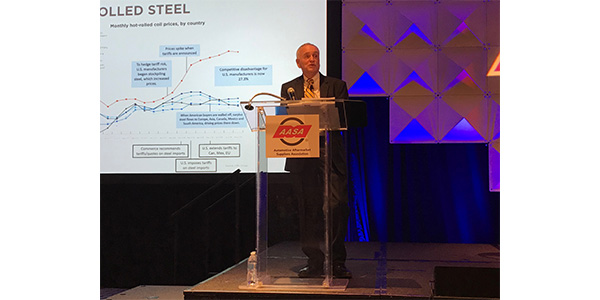 Regardless of whether the Trump administration can broker a trade deal with China, panelists at the Automotive Aftermarket Suppliers Association’s (AASA) 2019 Vision Conference in Dearborn, Michigan, had a message for the automotive aftermarket: Expect trade drama with China to be a fact of life for the next several years.

Regardless of whether the Trump administration can broker a trade deal with China, panelists at the Automotive Aftermarket Suppliers Association’s (AASA) 2019 Vision Conference in Dearborn, Michigan, had a message for the automotive aftermarket: Expect trade drama with China to be a fact of life for the next several years.

“I just don’t think it’s going to go away anytime soon,” asserted Jay Burkhart, president, North American aftermarket, for the TRICO Group, a Rochester Hills, Michigan-based manufacturer of the TRICO, Carter, ANCO, Airtex, StrongArm, Autolite and FRAM brands. “I think it’s a condition of running a manufacturing business for at least the next three or four years.”

Ann Wilson, senior vice president of government affairs for the Motor & Equipment Manufacturers Association (MEMA), is optimistic that the United States will reach a trade agreement with China by the end of April. However, she said she expects the Section 301 tariffs on various Chinese goods and the Section 232 tariffs on imported steel and aluminum to stay in place regardless of what happens, “because the administration has made it very clear we need an enforceable program with China.”

“Unfortunately, I think the steel tariffs, especially, are here to stay for some time,” Wilson added. “ … As you start to do scenario planning, I would say that we are in for a long, hard debate continuing on steel and aluminum.”

Invoking Section 232 of the Trade Expansion Act – which authorizes the president to impose tariffs in the name of national security – President Trump in March 2018 levied a 25% tariff on steel imports and a 10% tariff on aluminum imports, with a few countries exempted (quotas are in place for those countries). The Trump administration is considering another round of Section 232 tariffs targeting imported passenger vehicles and auto parts, Wilson noted.

“Those of you who are importing parts – whether it’s from China, Vietnam, Europe – if the President decides to implement these tariffs, your parts may be affected by these tariffs,” Wilson said.

The impact of the existing 25% tariff on imported steel has been “devastating” for the automotive aftermarket, said Frank Oliveto, vice president, sales and marketing, for the Util Group. The company uses a fine-blanking process to produce metal backing plates, brake shoes, shims and brake hardware for OE and aftermarket customers.  “It’s just killing us on the aftermarket,” he said.

Oliveto displayed a chart showing the spike in U.S. hot-rolled steel prices after the March 2018 steel tariffs went into effect. Due to the tariffs and the “current drama” with China, the gap between the price of Chinese steel and U.S. steel has widened to the point that the Util Group’s private-equity owners have decided to close one of the company’s North American factories and move the production to China, according to Oliveto.

“This is the picture that we’re facing as a steel stamper,” Oliveto added. “It’s causing some chaos for us, as you can imagine.”

It’s a complicated issue, of course, as Oliveto said he supports “fair and equal trade,” and asserted that China’s state-controlled steel industry – long accused of dumping cheap steel into the international market – is creating an “overabundance of capacity” that’s “fueling the heavy appetite for North American lower-cost and lower-cost brake pads.”

“An industry colleague of mine calls it ‘a race to the bottom,’” Oliveto added.

Still, Burkhart isn’t sure tariffs are the answer to the range of trade issues with China. Although he understands what the Trump administration is trying to accomplish, there’s been “a lot of collateral damage” to U.S. manufacturers in the process. He says the Section 232 steel tariffs, in particular, have been “insidious,” as they’ve pushed global steel prices higher.

“Almost everything in the aftermarket has some type of steel in it,” Burkhart added. “ … For us, that’s had a bigger impact than the [Section 301] Chinese tariffs.”

There have been three rounds of Section 301 tariffs on Chinese imports, starting in July 2018 with a 25% tariff on $34 billion worth of imported goods. In August 2018, the Trump administration issued a 25% tariff on additional product categories, and followed up in September with a 10% tariff on $200 billion worth of Chinese products. The 10% tariff was set to increase to 25% in January, but Trump in December announced he would keep it at 10% while negotiations with China continue.

“I think the consumer easily could take another 20% on most of the parts in our industry,” he said, adding that prices for many parts categories have dropped in recent years.

Perhaps the biggest challenge the tariffs present to manufacturers is the uncertainty they bring to the marketplace, “because most of the investments that people in manufacturing make are long-term plays with paybacks over two, three, four, five years,” Burkhart explained.

“We have not made any capacity-expansion decisions in the last year,” Burkhart said. “We were going to put some more money into one of our plants, but we didn’t really know which way to go. … I think we can’t be the only company looking at those kinds of challenges.”

If there’s any silver lining to all of this, it’s that the TRICO Group has become “more flexible,” Burkhart added. As the trade drama with China  – and Mexico, in recent weeks – has unfolded, the company has been talking with potential new suppliers in countries where it hasn’t done business before. Burkhart said there might even be an opportunity for manufacturers to engage with their customers “in a different way.”

“Maybe there’s different kinds of buying, or maybe there’s more scenario planning that could be done with customers as opposed to arguing it out,” he said. “ … I think there’s an opportunity for suppliers to help present options or scenarios for their customers.”

If Oliveto had five minutes with President Trump to talk about trade, his message would be to stay firm with China. On that note, Oliveto said he believes Trump should follow through with his initial plan to boost the third round of Section 301 tariffs to 25%.

“I would tell him he started a dialogue. He’s caused a lot of drama, especially for our company,” Oliveto said. “And I would say, ‘Don’t waffle. Either go in all the way or just drop it.’”

Advertisement
In this article:AASA Vision Conference, Tariffs
Print
Up Next:

Women In Auto Care Automotive Communications Awards
Connect with us