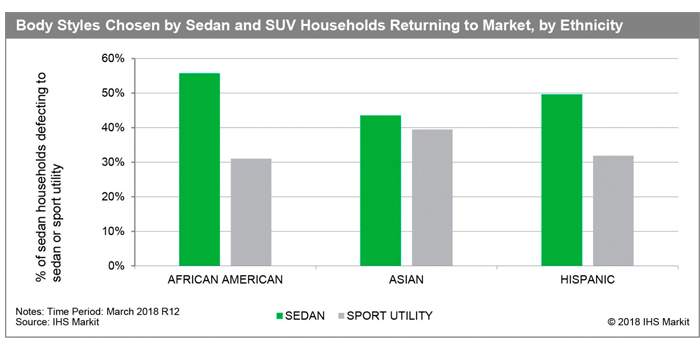 The IHS Markit analysis found variances among ethnic groups, household income and age levels that may be surprising.

Consumer preferences for SUVs continue to rise, and at a faster pace than five years ago, based on new loyalty and defection analysis from business information provider IHS Markit. More than 35 percent of U.S. households with a sedan in the garage that returned to market for a new vehicle from April 2017 to March 2018 acquired an SUV, up from just 24 percent five years ago.

However, not all consumers are moving to the popular body style at the same pace. The IHS Markit analysis found variances among ethnic groups, household income and age levels that may be surprising.

The propensity to defect from a sedan to an SUV is much higher among Asians than African American or Hispanic consumers in the U.S., according to the analysis. Nearly 40 percent of Asian sedan owners returning to market for a new vehicle in the time frame defected from a sedan to an SUV, at a significantly higher rate than Hispanics (31.9 percent) or African Americans (31 percent), according to the analysis. 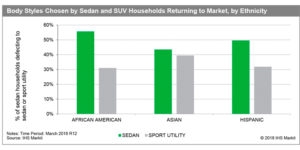 Perhaps surprisingly, 55.7 percent of African American sedan owners opted to stay with a sedan for their next vehicle purchase, versus only 49.6 percent of Hispanic and 43.5 percent of Asians.

Various age groups have different patterns for defection from sedans as well. During the April 2017 to March 2018 timeframe, the propensity to defect from sedan to SUV decreased as age increased. Loyalty to sedans is extremely high among older consumers, and varies by nearly 20 percentage points from the youngest consumers to the oldest. 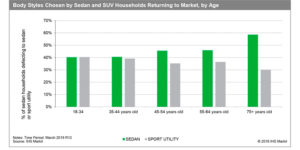 “Many marketers may not realize the importance of continuing to target their sedan marketing and advertising efforts toward older buyers,” said Tom Libby, loyalty principal at IHS Markit. “These consumers sometimes have more buying power as well, which means an important group of prospective customers could be at risk of being missed in advertising and marketing efforts.”

Household income levels also contribute to consumer preferences and defection rates. The analysis found as incomes rise, consumers are more likely to defect from a sedan to an SUV. Conversely, the propensity of sedan owners to choose another sedan when returning to market declines as income levels increase. These data would suggest the healthy U.S. economy itself is contributing to the flourishing SUV business. 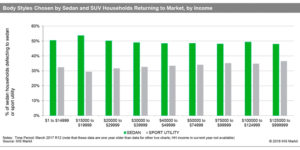 The complete analysis by IHS Markit covered new vehicle transactions from April 2017 to March 2018, including purchases and leases among owners who had acquired a new vehicle during the 12-month time frame. The SUV/CUV body style as defined by the research includes SUV and CUV models collectively. In addition, the second vehicle may be an addition to the household fleet, not necessarily a replacement. Age and income levels reported in the analysis are based on head of household, who may not be the primary driver.

The Herman Trend Alert: The Shifting Future Of The Workforce Part 1

SUV Shift Not Prominent Among All Groups, IHS Markit Says