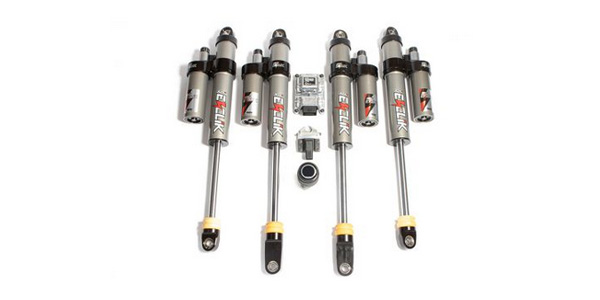 “The new E-CLIK system incorporates proprietary technology and tuning to deliver the perfect ride and control across any terrain, and on any surface,” the company said in a news release.

This is the first fully independently adjustable electronic suspension system for Jeeps, according to SDi.

“You don’t have to get out of your vehicle to lock the hubs anymore, so why get out to adjust your suspension?” said Dan Worley, owner of SDi. “Suspension has always been about trade-offs. If you make an improvement in one area, you lose something in another. With E-CLIK ACTIVE, that problem has been solved.”

Originally announced in 2018 at the SEMA Show in collaboration with Walker Evans, E-CLIK has progressed into three levels of suspension control for Jeep owners, all without leaving the driver’s seat.

E-CLIK allows drivers to make suspension changes from their seat as needed via rocker switches. E-CLIK ACTIVE does the job for the driver, automatically, and E-CLIK PRO “introduces ultimate tunability into the automatic, electronic system,” according to the company.