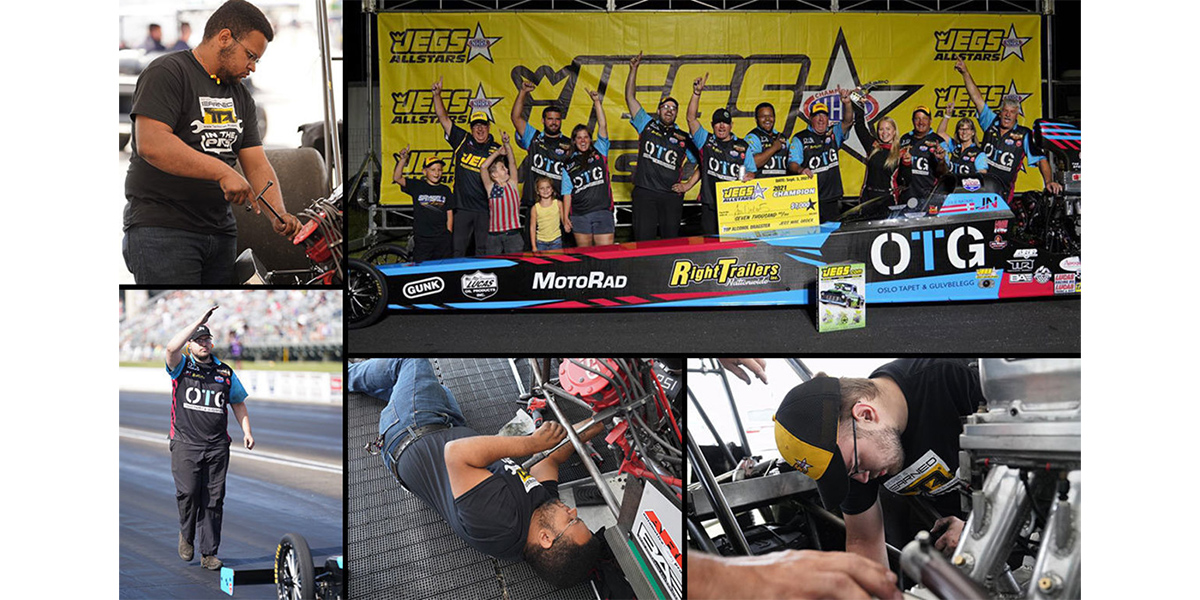 These two students—Jeremy Sullivan and Juliaun Pracht—were winners of the 2021 “Respect is Learned In The Pits” contest.

Technician.Academy welcomed two junior technicians to the NHRA U.S. Nationals in Indianapolis over the Labor Day weekend to work alongside Randy Meyer Racing (RMR). These two students—Jeremy Sullivan and Juliaun Pracht—were winners of the 2021 Respect is Learned In The Pits contest, an annual opportunity that provides student technicians with hands-on experience in the pits and lifelong connections to the drag racing industry.

“This is our fifth year in the pits with Randy Meyer Racing. It’s such an honor to provide these young technicians with real-world experiences in a field they may have thought they’d never get into. Our previous six winners have gone on to do incredible things after their experience with Randy Meyer Racing, and I’m excited to see what Julian and Jeremy do with their new connections and passion for drag racing,” said Technician.Academy Founder Shawn Collins.

Jeremy and Juliaun experienced a ride like none other. Not only did they gain invaluable experience with a 3X NHRA Top Alcohol Dragster World Championship team and get a behind-the-scenes look at drag racing, but they were able to witness another RMR victory during the JEGS Allstars race on Friday.

“Being able to be a part of that was great,” said Juliaun. “Even last night, it just kind of hit me, leaning against [the car], sipping some water at the top end of the U.S. Nationals, standing next to a JEGS Allstar trophy. And I was like, ‘I did this. I put this engine together.’”

Julie Nataas—driver of the OTG, Technician.Academy, and MotoRad dragster—took on the best racers in the country that Friday to win one of the most prestigious sportsman races of the year. Her performance during the JEGS Allstars race qualified her for the U.S. Nationals where she took the No. 1 qualifying spot with a 5.162 and a reaction time of .003 seconds.

Both Julie and Rachel Meyer — driver of the NTK, Technician.Academy, and Ivy Tech Evansville dragster — made it to the semifinals of the U.S. Nationals on Sunday. Unfortunately, the two RMR drivers were bested by their opponents and did not win the weekend’s big event.

“Thank you to Technician.Academy, MotoRad, and Ivy Tech for bringing us two amazing interns this year,” said Julie. “I had Juliaun working on my car, and he fit right into my team. He learned quick! I have no doubt that he will be out working on a race car again. Both Juliaun and Jeremy wanted to learn and understand, which is a big plus in my book. They took every chance they could to ask questions.”

“I’m so grateful to be standing here wrenching on these cars,” Jeremy said during the first day at the track. “As soon as I saw that car go down the strip for the first time, I was so excited because I actually got to work on that car. It’s just incredible.”

To learn more about the Respect is Learned In The Pits program, visit www.Technician.Academy.

Advertisement
In this article:Respect Is Learned In The Pits, Technician Academy
Print
Up Next:

AAPEX 2021 Begins Weekly Webinars In October
Connect with us