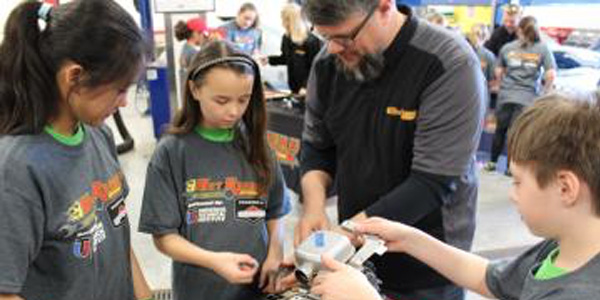 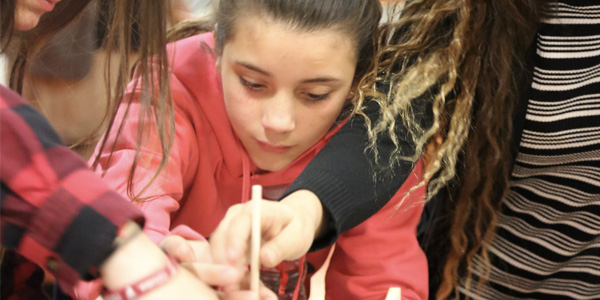 A national model for STEM (science, technology, engineering and math) career pathways in Cynthiana, Kentucky, is bulldozing the obstacles girls face when considering a career in manufacturing. Harrison County High School freshman Kara Hines says there are so many great options in STEM, she “just can’t pick right now.”

“Engineering, chemical engineering, material science,” Hines listed the fields currently at the top of her list. “If you start earlier, the easier it is for you to go into a career. You’ll figure out what you like sooner.”

This week, in celebration of National Manufacturing Day, Toyota, Harrison County Schools, Project Lead the Way (PLTW), Kentucky FAME (Federation for Advanced Manufacturing Education) and The Manufacturing Institute announced that the manufacturing-focused career pathway in Harrison County will now stretch from pre-kindergarten to master’s degree level, an achievement unparalleled, according to the National Career Pathways Network.

“FAME has developed the most seamless and comprehensive career pathway that we are aware of among the institutions affiliated with NCPN,” said Debbie Mills, executive director, National Career Pathways Network, a national group supporting pathways initiatives across the U.S. “The FAME Career Pathway is a benchmark for programs across the U.S.”

The leading-edge pathway gives students like Hines a direct line of sight to continued education with little to no student debt, while also gaining work experience and getting a high-paying job. It’s also focused on engaging more female and minority students in STEM subjects early.

While many other school districts offer STEM classes and career pathways, the fact that this program begins at the pre-k level makes it unique. Each year a student is engaged in the pathway, STEM activities and skills are built upon.

Following high school, students completing the pathway may choose to attend the Advanced Manufacturing Technician program (AMT) at Bluegrass Community and Technical College (BCTC), with the opportunity to:

Students in the AMT program are sponsored by an area manufacturer where they work two days a week and attend classes three days. This allows students to graduate with little to no student debt. After earning their associate degree, students are often offered a job at a local manufacturer with a salary of up to $75,000. To date, in fact, close to 90 percent of FAME graduates have found jobs with the companies where they interned. The bachelor’s and master’s programs are built for students who work full-time. Courses are offered at night on Toyota’s Georgetown campus and online.

“We’re investing in the youngest of students now so that in 15 or 20 or 25 years, we have diverse, skilled workers to continue building quality vehicles right here in Kentucky,” said Susan Elkington, president, Toyota Motor Manufacturing, Kentucky. “This partnership and pathway are critical to combat the skills gap. We must arm our students with the proper tools for 21st Century careers. That includes problem-solving, technical skills, an understanding of mechanics, physics, and so much more. The key is getting children excited about STEM early.”

Nationwide, 2 million jobs could go unfilled over the next decade because of a lack of skilled workers. Toyota sees this as a critical investment to make for the future of its business.

The pathway achievement also was applauded by Carolyn Lee, executive director of The Manufacturing Institute (Washington, D.C.). “Given that the shortage of workers in manufacturing is already at crisis levels and getting worse, it is vital that we attract more young people to the industry and help them gain the skills they need to succeed. That’s exactly what Harrison County’s program aims to do. This program recognizes that learning is a journey, not a destination. I believe it will help set an example for educational initiatives around the country.”

MFG Day is an annual initiative on Oct. 5, led by the National Association of Manufacturers’ social impact arm, The Manufacturing Institute, where manufacturers across the country open their doors to students, teachers, and others to demonstrate the reality of today’s manufacturing careers.

The FAME Career Pathway also works to dispel the stereotype that women don’t want or can’t succeed in technical careers by engaging both girls and boys. While women make up half of the college-educated workforce, less than a third hold STEM jobs. Only about seven percent of all mechanical engineers are women.

“To thrive in this rapidly evolving world, students must have the knowledge and skills to compete in the workforce and to solve some of the most pressing issues facing our communities and our nation,” said Rex Bolinger, senior vice president and chief partnerships officer at PLTW. “Through its support of PLTW programs, Toyota has been a tremendous partner in this effort by connecting students to career pathways.”

Sisters Sara Jenkins Palmer and Marly Jenkins saw the writing on the wall and jumped at the opportunity to take part in the AMT program. Growing up, both thought they’d continue the family tradition of teaching, but they also enjoyed the Project Lead the Way classes at Harrison County High. Both saw the benefits of a hands-on educational experience that left them with little to no debt and a good job in the end.

Sara worked at Toyota through the AMT program and moved to Hartland Automation once she graduated in 2014. In the years since, she’s excelled. She’s been promoted four times and is now the team lead for manufacturing. She’s finishing her bachelor’s degree and will graduate next spring.

While Marly calls the pathway a “game changer for kids,” Sara says she’s living her dream life at age 24. “There aren’t a lot of opportunities to go to college without racking up debt. This program has allowed me a lifestyle I never thought I’d have.”

Kara Hines still has a few years to narrow down her career choice, but she says a fifth-grade trip to tour the Toyota plant in Georgetown made a lasting impression. “It was amazing to see the robotics and car production. It would be cool to be an engineer and build those parts.”

Advertisement
In this article:MFG Day, STEM
Print
Up Next:

Continental Tire Partners with Universal Technical Institute
Connect with us