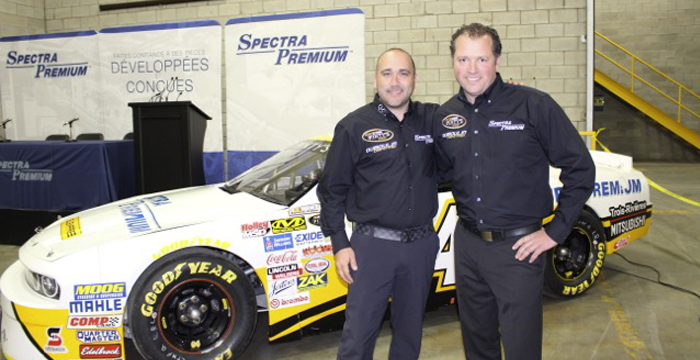 Spectra Premium engineers will partner with the Dumoulin Competition crew to develop a radiator for Dumoulin’s car. 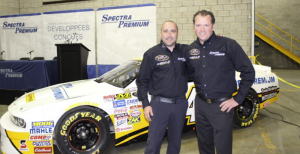 Spectra Premium has announced a major sponsorship agreement between renowned racecar driver Jean-François Dumoulin and Spectra Premium Industries for the 2016 NASCAR Pinty’s season. Spectra Premium says Jean-François’ raw talent, passion and perseverance were key to making this partnership a reality, allowing his participation in at least six events on the championship circuit in 2016 at the wheel of the Dodge No. 04 Spectra Premium/Bernier Crépeau/Bellemare/MIA car.

In addition, Spectra Premium engineers will closely work with Dumoulin Competition crew to develop a radiator for Jean-Francois Dumoulin’s car.

“In 2014, I had the chance to meet Jean-François for the first time at a social event where I discovered a gentleman who is a consummate professional and kind and compassionate human being. The entire Spectra Premium team is excited about being able to bring our passion and expertise to the table in the development of a new high-performance product in collaboration with Dumoulin Competition. Jean-François was born behind the wheel of a racecar and his passion and enthusiasm makes him an ideal Spectra Premium brand representative,” said Jason Best, senior vice president, aftermarket, Spectra Premium.

“This is a turning point for me and Dumoulin Competition. Several companies have been with us for many years now and I greatly appreciate their continued support. This is the first time in the NASCAR Pinty’s series, however, that I have the privilege of welcoming a partner of this magnitude. This year, I will proudly don my Spectra Premium racing attire, symbolizing their trusted, quality products, many of which are manufactured in Quebec,” said Jean-François Dumoulin.

The Origins of the Partnership

Late in 1995, Jean-François Dumoulin caught the attention of the Player’s Driver Development Program scouts (Ford and Formula Atlantic). He became one of the youngest drivers ever to be recruited by the legendary Player’s Driver Development Program and was touted as a strong contender for the championship title in Formula Ford (1996 and 1997 seasons). Demonstrating maturity both on and off the track, and combined with his raw talent, Dumoulin, affectionately known as “The Kid” earned his place as a fierce competitor, even amid many seasoned veterans.

The synergy of goals and values between Dumoulin and Spectra led to the realization of a business partnership in 2015, during the most coveted event of the season, the Grand Prix Trois-Rivières. Discussions continued thereafter and culminated in a common long-term vision, a trusted, reliable partnership between Spectra Premium and the driver of the No. 04 Spectra Premium/Bernier Crépeau/Bellemare/MIA care.

“Thanks to Spectra Premium’s support we are working on building our own team, and the technical expertise and inspiration of this family business, that has made its mark around the globe, has given us the momentum we needed to shift to another gear,” said Jean-François Dumoulin, two-time winner of the 24 Hours of Daytona.

Dumoulin Competition is shifting gears in more ways than one. In 2015, the purchase of two cars by Eric Cherub (Motorsports In Action) afforded Jean-François Dumoulin the opportunity to race and build confidence on ovals tracks in the NASCAR Pinty’s series. This year, the No. 04 Spectra Premium/Bernier Crépeau/Bellemare/MIA car is welcoming the highly specialized talent of new Crew Chief Robin McCluskey. The 2016 objective is to maximize the performance of the car and to ensure the best possible set-up and preparation of the cars.

McCluskey began his career in Western Canada as a racecar driver in a regional series. Born into a motor racing family, he followed in the footsteps of his father and uncle by developing expertise in manufacturing high-performance chassis in McColl, Levitt and, in recent years, with White Motorsports.

“Robin is a true asset to the team, both in terms of his engineering expertise. We strive to develop high-performance vehicles,” said Dumoulin.

The first start of the 2016 season will take place on May 22 at the Canadian Tire Motorsport Park (CTMP) during Victoria Day Speedfest. “I cannot wait to start the season at CTMP with a car developed by the trusted No. 04 Spectra Premium/Bernier Crépeau/Bellemare/MIA team. I am confident that we can deliver a performance to meet and hopefully exceed expectations,” said Dumoulin.

Cloyes' Aftermarket Catalog Grows During First Half Of 2020

NTN Receives Pursuit Of Excellence Award From SAI
Connect with us