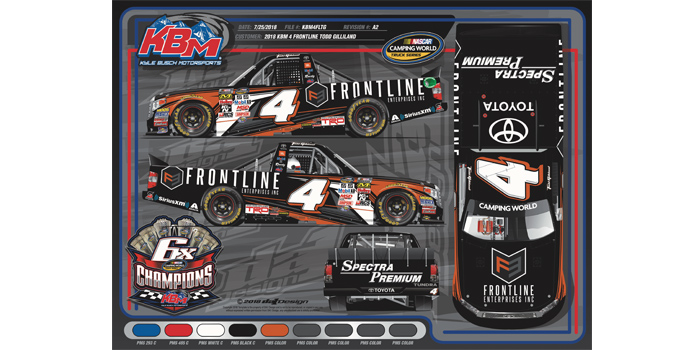 For this first partnership between team and sponsor, Spectra Premium will adorn the No. 4 Toyota Tundra this weekend. 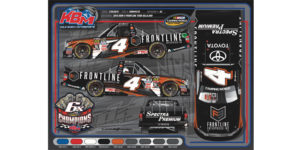 For this first partnership between team and sponsor, Spectra Premium will adorn the No. 4 Toyota Tundra this weekend.

In his 13th NCWTS start this season, rookie of the year contender Todd Gilliland will race the No. 4 Frontline Enterprises Inc./Spectra Premium Toyota Tundra at the Chevrolet Silverado 250 event, having successfully driven home with top-five finishes in the two previous races in Michigan and Bristol.

“I’m looking forward to returning to Canada for the race this weekend and having Spectra Premium and Frontline Enterprises on my Tundra,” said Gilliland. “CTMP is a very fast road course. I finished 11th in my first race there last year, but I have my sights set on Victory Lane this time.”

“We’re very pleased about this partnership with Kyle Busch Motorsports and this return to the Camping World Truck series,” said Jason Best, senior vice president, aftermarket, Spectra Premium Industries. “We wish Todd the best of luck for this upcoming race.”

Kyle Busch Motorsports will field three entries with trucks No. 4, No. 18 and No. 51 at the only Canadian event of the season for this series. The race team has secured six Truck series owner’s championships in eight years, including last year’s owner and driver championships with racer Christopher Bell.

Spectra Premium was previously involved in last year’s CTMP NASCAR truck race and also is active in the NASCAR Monster Energy Cup Series and the Canadian NASCAR Pinty’s Series. The latter also will race at the same track on Sunday.