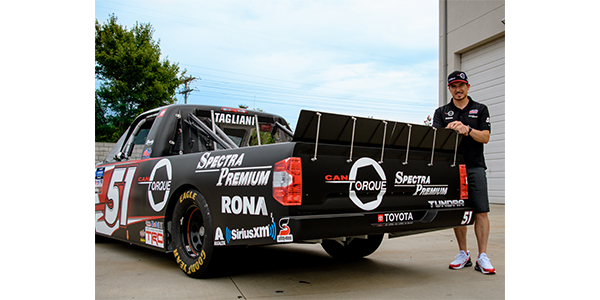 “We are proud to participate in the sole Canadian event of the NASCAR Trucks series for the third year in a row,” said Jason Best, senior vice president, Aftermarket at Spectra Premium.

Two Toyota Tundra trucks prepared by Kyle Busch Motorsports (KBM) will feature Spectra Premium this weekend: No. 4 driven by Todd Gilliland and No. 51 driven by Alex Tagliani at the Canadian Tire Motorsport Park (Mosport). For the second time since its involvement in the NASCAR Gander Outdoors Truck Series (NGOTS), the company is present on two trucks for the weekend, and this time, the trucks also will utilize a Spectra Premium high-performance radiator.

“We are proud to participate in the sole Canadian event of the NASCAR Trucks series for the third year in a row,” said Jason Best, senior vice president, Aftermarket at Spectra Premium. “As both sponsor and manufacturer, we have high hopes for the top of the podium with two drivers who know the track very well and had great runs in last year’s edition. Good luck Todd and Alex!”

Last year, Gilliland was a corner away from securing his first career win in the series, before a contact sent him back to the 11th place. On his side, Tagliani finished in 10th place last year and scored a top-5 finish and two poles in the previous years.

Spectra Premium will be featured on a truck for a fifth race this season, having adorned Kyle Busch Motorsports’ No. 46 truck driven by Raphaël Lessard. The rookie drove the Toyota Tundra the last time in Bristol last week to a 12th place finish.

The Spectra Premium high-performance radiator was introduced this year and installed in Lessard’s truck at the Dover race in May. The automotive parts manufacturer will be looking for a second win in the series for its racing radiator, following No. 16 Austin Hill’s victory in Michigan on Aug. 10.

Tagliani will perform a double-duty this weekend at the same track. With Spectra Premium as one of his sponsors, the full-time driver in the NASCAR Pinty’s series will try for his first championship, currently sitting fourth.

Spectra Premium is a North American automotive, light and heavy-duty truck parts manufacturer for the heating and cooling, fuel delivery and engine management systems. The company’s cooling system engineers honed their stock-car racing expertise in the NASCAR Pinty’s Series, the highest national stock-car series in Canada, in which the radiator provided convincing results after only two years on the tracks.

Spectra Premium Featured On 2 NASCAR Trucks This Weekend At Mosport

Schaeffler Presents Products, Repair Solutions At AAPEX
Connect with us