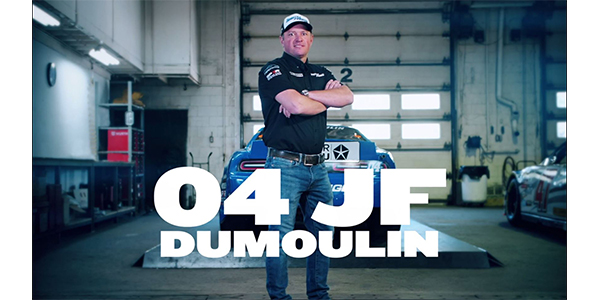 This is the second part of the international NASCAR driver exchange project between Canada and Europe.

Canadian stock-car driver and Spectra Premium Brand Ambassador Jean-François Dumoulin will participate in the two final rounds of the NASCAR Whelen Euro Series, in both the ELITE 1 and ELITE 2 divisions. The four races, to be held on the Circuit Zolder road course in Belgium from Oct. 19-21, will complete the driver exchange program that started last August when French driver Frédéric Gabillon participated in the NASCAR Pinty’s race held over this year’s Grand Prix de Trois-Rivières (GP3R) weekend.

“The 2018 season is now over, and I am very glad to take the time to focus on the upcoming Zolder race in Belgium. For Canadians, Zolder is a mythical track, and I really look forward to compete in the highly competitive NASCAR Whelen Euro Series, even more so with the use of the Spectra Premium high-performance radiator installed in my NASCAR Euro No. 04 Spectra Premium Toyota Camry,” said Dumoulin.

Jean-François and his Dumoulin Competition team landed in Paris this past Monday. As part of the build-up events, team members will visit with NASCAR Whelen Euro Series CEO Jérôme Galpin, as well as going to the RDV Compétition workshop where Jean-François’ No. 04 racecar has been prepared. Dumoulin also will meet with GP3R teammate Frédéric Gabillon, who is facing a tough weekend in his bid for his first championship title.

The team will then travel to Belgium for the first practice session on Saturday morning. Dumoulin will drive the No. 04 Spectra Premium Toyota Camry for the very first time during the Elite Club event that offers the chance for fans to live the racetrack experience as passengers. Saturday morning’s qualifying session will determine the starting grid for the weekend.

“I should be able to adapt very quickly as Whelen Euro cars use more efficient brakes and tires, and adjustable suspensions. These are all elements I know well from my experience on European tracks, notably at Monza in Italy,” said Dumoulin. “These will be intense 30-minute races given that they will determine the 2018 champions. We intend to run a smart race and, most of all, have fun doing it! I’m really looking forward to seeing Fred Gabillon again and I hope he will win his Whelen championship just like my brother Louis-Philippe did in the Canadian NASCAR Pinty’s Series.”

“Following the great success of the drivers exchange project at the GP3R, we are looking forward to the next step of the project. We’re confident that JF will continue to do us proud as a Spectra Premium representative during the drivers exchange races in Europe,” added Jason Best, senior vice president aftermarket, Spectra Premium. “Moreover, our high-performance radiator will be running for the first time on the European continent, another important milestone for our motorsports radiators.”

Unlike the NASCAR Pinty’s Series, which applies a constant points scale for all races, the European NASCAR championship grants double points for semi final and final races, which causes the championship to be decided in those final races. Following the semi-finals held at Hockenheim last month in Germany, the fight for the championship is the closest it has ever been in the series’ history: only 12 points separate the four ELITE 1 leaders, while the two ELITE 2 leaders are separated by a mere two points.

North American fans will be able to watch the races live on the web at fanschoice.tv, the NASCAR Whelen Euro Series’ Youtube page and on their Facebook page as well.