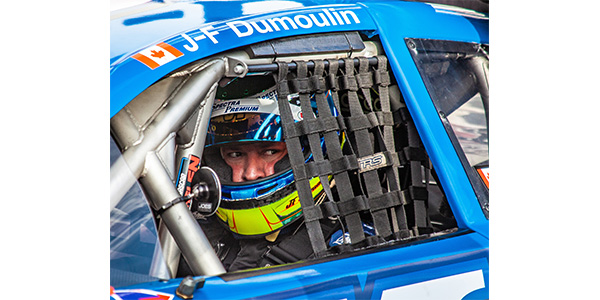 Canadian Stock Car driver and Spectra Premium Brand Ambassador Jean-François Dumoulin took part in the second half of the Canada-Europe Exchange program as part of the NASCAR Whelen Euro Series season finals, which took place at the Zolder circuit in Eastern Belgium. The event encompassed Friday practice sessions and two full days of racing for two classes (Élite 1 and Élite 2 – Oct. 18-21). Discovering a technical and complex track as well coping with a less-than-perfect car did not prevent the Canadian driver from shaving more than 7 seconds of his best times from Thursday to those of Sunday.

The RDV Compétition Team and manager Franck Violas received the No. 04 car, already equipped with the Spectra Premium High-Performance radiator, only few days before the event. Some very hard work in the shop left the car still with some important issues that could only be discovered and fixed at the track over the weekend, such as a weak braking system, a loss of power at high revolutions-per-minutes, and a failing second gearbox ratio.

Despite having to focus on testing and validating repairs when on track, Jean-François Dumoulin was able to learn the track and bring the car to a point where he cut seven seconds off his Thursday practice by the final race on Sunday.

“The Spectra Premium High-Performance radiator worked perfectly over the weekend, giving us some latitude with settings,” explained Jean-François Dumoulin.

Jean-François Dumoulin’s comfort and level of confidence with the car was growing as he prepared for the Saturday qualifying session. “The team has given me a car that I can work with comfortably right up to the limit, especially with the new brakes that were fitted overnight.’’

Unfortunately, things did not work out as planned in the afternoon Élite 2 race, the second one of the day, as a blown second gear prevented the car from even taking the start. Swapping gearboxes was thus added to the overnight work list for the already overworked team.

The news was good after the Sunday morning warm-up session, as the new brakes were up to the task at hand, and the gearbox was working flawlessly. All was not perfect unfortunately as the lack of power at the top end still made passing at high-speed impossible. Starting from the back of the grid (25th place) for the Élite 2 final, Jean-François Dumoulin was able to adapt his driving to the car’s behavior and clawed his way up to a well fought over 15th place at the finish.

“The car was easy to drive hard and I enjoyed my tussle with the three other drivers in my pack. The slight loss of power prevented me from setting up the other drivers on the straights and getting by them diving into corners. All I needed was an extra 5 meters but going for it anyways was too risky despite the excellent brakes, and I certainly did not want to cause a crash,” said the driver.

All eyes and hopes were now turned to the Élite 1 race, the final one of the weekend. Starting 25th, Dumoulin pushed as hard as he could right from the green flag, and maintained his furious pace all the way to the end of the race. In his typical style, he started to move his car around behind his competitors to disrupt their concentration as they were now having to deal with the attack but also with worn, slippery tires.

This carried him past five competitors in the last five laps of the race and up to a surprising 20th place at the end of the 16-lap race.

“The car was working well but was still hampered by glazed and less than optimum brake pads at the front, as I was certainly giving them all they could take – and a little more. That is why I waited for the others to have worn tires and brakes before attacking full out the end,’’ explained the driver after the race.

For his part, Dumoulin, a winning endurance racer, said he enjoyed the technical layout of the physically demanding track and the caliber of the other drivers. The Québec-based visitors were unanimous: it was a great experience.

Congratulations to the two drivers in the RDV Competition No. 3 car:

This is the conclusion of the first Canada Europe Exchange Program. The group will gather again at the NASCAR Champions Banquet this coming December.

Covercraft Expands Production Of PPE In Texas Facility
Connect with us