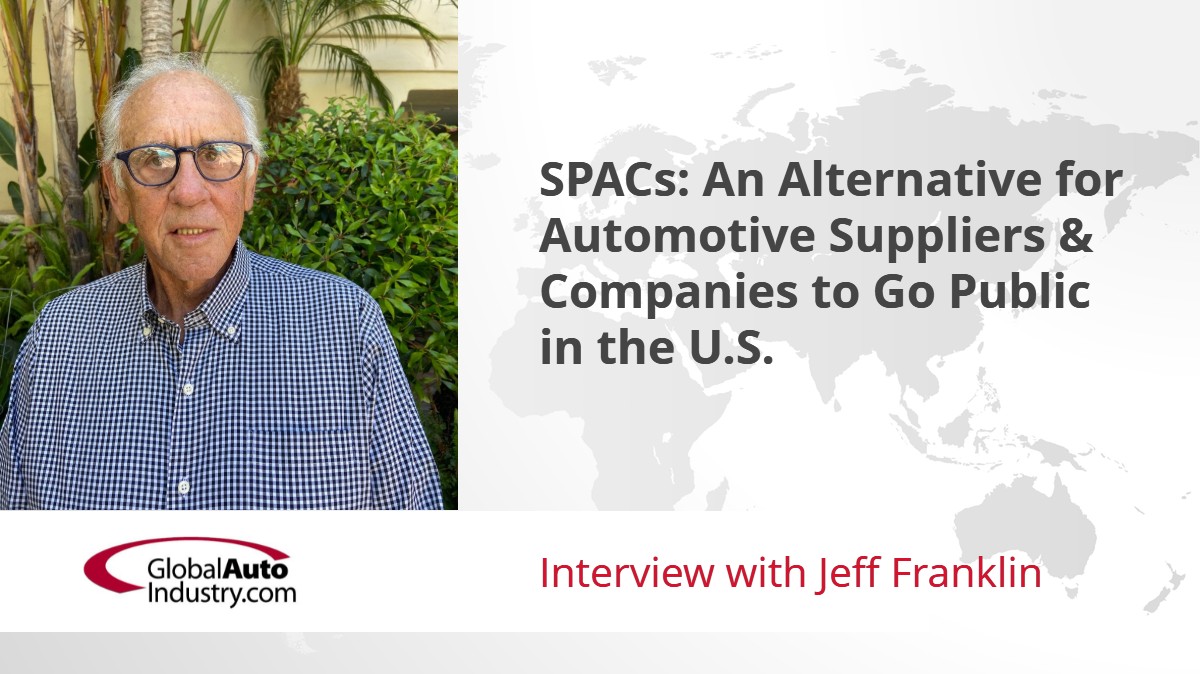 GlobalAutoIndustry.com’s latest Audio Interview “SPACs: An Alternative for Auto Suppliers and Companies to Go Public in the U.S.” features Jeff Franklin, current chairman and CEO of Los Angeles-based ATI. His current consulting practice focuses, not only, on advising funds and companies on financial transactions in the entertainment business, but also, acquisitions and restructuring of entertainment assets. In addition, Franklin advises companies on going public through U.S.-based Special Purpose Acquisition Corporations (SPACs), a.k.a. “blank check corporations.”

In the music industry, he has advised leading companies such as Columbia Records, PolyGram, Universal Music Group, Casablanca Records, and Caytronics Corp. for the sale of their record companies.

In the 12-minute audio interview, Franklin discusses these questions:

About Jeff Franklin, Chairman and CEO of ATI

His experience extends beyond these sectors into publishing, branded entertainment, new media, and music publishing.  In 1980, Jeff sold his music business to International Creative Management (ICM), where he remained a consultant at the agency for five years following the merger.

Over the years, Jeff has served as a consultant for the top entertainment companies in the marketplace.  In the music industry, he has advised record companies including, but not limited to, the following: Columbia Records, PolyGram, Universal Music Group, Casablanca Records, and Caytronics Corp. for the sale of their record companies.  He consulted for Universal Pictures in acquisition of intellectual property rights for their theme parks, including successfully negotiating the rights acquisitions of Dr. Seuss for theme park attractions.  Furthermore, he has been a consultant at Harvey Comics, Platinum Studios and Good Times Video, among others.

GlobalAutoIndustry.com is the leading business intelligence source for the worldwide automotive industry, connecting OEMs, OE suppliers, aftermarket and automotive technology companies with the resources to effectively do business internationally.

Our flagship Audio Interview series and eJournal newsletters address important business and operational challenges for industry professionals. Published weekly and syndicated through leading industry media partners, our content has a distribution audience of over 1 million automotive professionals worldwide.  The Interviews are syndicated through WardsAuto (US), aftermarketNews (US), ETAuto (The Economic Times of India), TU Automotive (UK), MEXICONOW, BORDERNOW and HORSEPOWER (Mexico).

Advertisement
In this article:globalautoindustry.com, SPACs
Print
Up Next:

SPACs: An Alternative For Suppliers To Go Public In The US