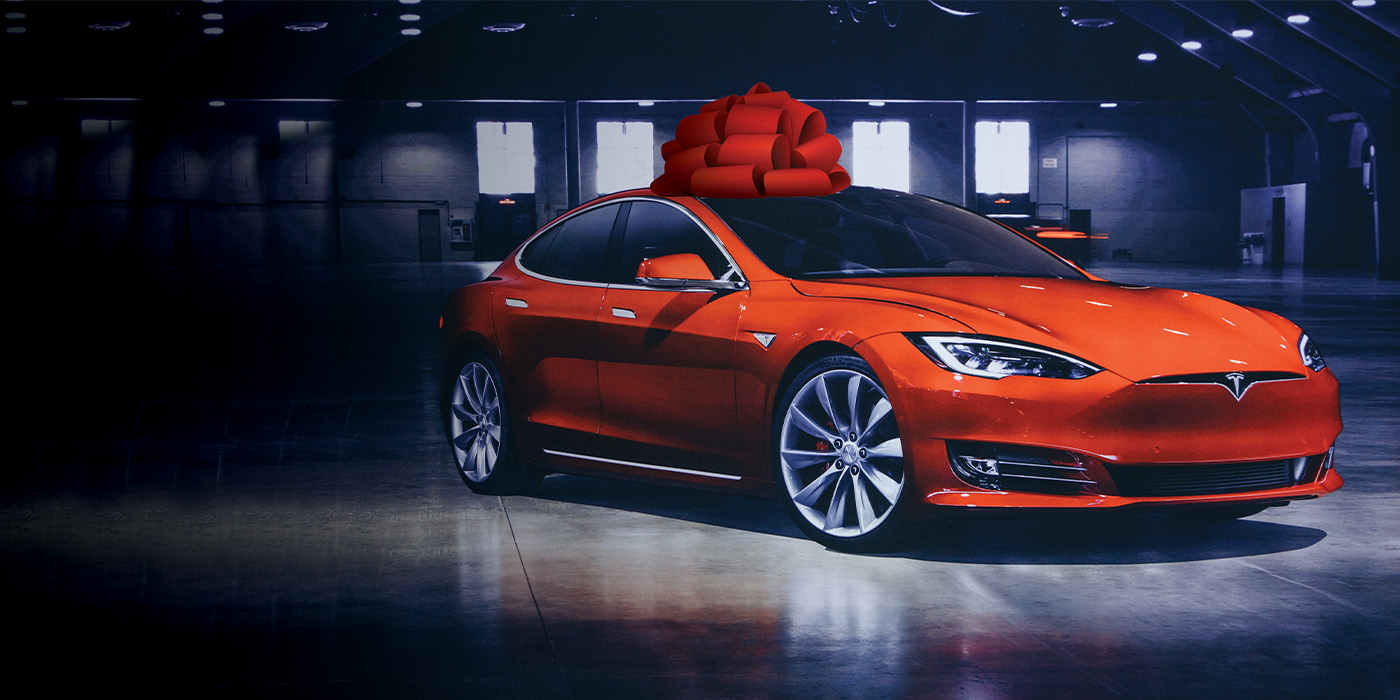 Autologue Computer Systems, a Buena Park, California-based software provider specializing in point-of-sale management systems for auto parts distributors, is a longtime advertiser in Counterman. But in the 35 years that Jim Franco has been the owner of the company, Autologue has never launched a national marketing promotion – until now.

Since it’s his first foray into the realm of contests and sweepstakes, Franco took a go-big-or-go-home approach to Autologue’s maiden voyage. Announced in early February, Autologue is inviting parts sellers and distributors to demo one of its e-commerce products, for a chance to win a 2021 Tesla Model 3 or $35,000 in cash.

“One of my marketing guys came up with the idea,” Franco says. “He suggested we give away a big-screen TV.  I said, ‘No, everybody’s got one of those. If we’re going to do something, we’re going to do it big.”

The grand-prize drawing will be held at the end of the year. To sweeten the pot, Autologue will hold quarterly drawings for $1,000 in March, June and September. The winners of the quarterly drawings will gain an additional entry in the Tesla giveaway.

Franco was hesitant to get involved in any type of promotion that might be perceived as “a gimmick, snake oil or a hustle,” which is why he emphasizes that this is a “customer-appreciation giveaway.” Accordingly, the theme of the promotion is “Autologue Gives Back,” and it’s open to existing and prospective customers.

The driving force behind “Autologue Gives Back” is Franco’s deep-seated belief that many companies in the automotive aftermarket are “technology-challenged” – at a time when e-commerce is exploding.

“It’s not because they’re not smart enough, or aware enough, or capable enough,” Franco says. “It’s just that they’re hesitant because they put a dollar sign in front of technology, and that’s a shame, because it’s just such a valuable tool.”

Autologue’s e-commerce tools are proven products that have been out in the field for years, and the company asserts that they can deliver an ROI of eight to 10 times their cost.

“I’m just trying to get more people to take a look at these phenomenal products that can make a difference in their businesses,” Franco says. “And I know they do.”

For KYB Americas Corp., the “Feeling Is Believing” consumer-rebate promotion – which launched on Feb. 15 – isn’t the company’s first rodeo, so to speak. KYB runs several promotions each year, and over the past decade, “Feeling Is Believing” has become its most popular campaign, according to Aaron Shaffer, KYB’s director of marketing.

Through April 15, consumers can earn up to $75 for purchasing a set of four KYB products. The offer is valid on all KYB shocks, struts and Strut-Plus complete assemblies. To help service providers and parts stores communicate the importance of replacing shocks, KYB has distributed marketing materials with the promotional details on one side and sales tips for the parts sellers on the other side.

The primary and obvious goal of any promotion is to sell more parts, Shaffer explains. For KYB, though, campaigns such as “Feeling Is Believing” have an educational tie-in that’s just as important.

“We have a category that is all-too-often overlooked and undersold, so we also need to constantly create awareness about why shocks and struts should be replaced,” Shaffer says. “So we always try to leverage a promotion to incorporate some kind of [educational] language or quick training, whether it’s at the distributor or service-provider level.

“With ‘Feeling Is Believing,’ we create a tent card that has the offer on the front, and then some suggested language on the back that works when you’re talking to the customer about replacing shocks and struts, just to remind people about the overall category and the benefits of replacing shocks and struts. If we don’t do that, we tend to get shuffled to the back, and everybody just focuses on fixing broken cars and they don’t think about maintenance enough.”

Over the years, Shaffer has learned that one of the key ingredients of an effective promotion is simplicity. With that in mind, KYB has streamlined the rebate parameters for “Feeling Is Believing” this year. In the past, the rebate amounts were determined by the type of product purchased. This year, the rebate amounts are based purely on the size of the purchase of qualifying products. For example, a purchase that’s between $125 and $300 entitles the consumer to a $25 rebate, while a purchase exceeding $500 entitles the consumer to the maximum $75 rebate.

The other key element of a successful promotion, Shaffer says, is making sure you have buy-in from your distributors – starting at the top of the organization and extending to the salespeople.

“We have a direct sales force, but we only have so many people,” Shaffer explains. “When we get buy-in from our distributors, now all of a sudden our sales force is in the thousands. That’s when we can really spread the word.”

While “Feeling Is Believing” tends to be the company’s most popular campaign, Shaffer emphasizes that KYB runs promotions throughout the year, with specific audiences in mind. For example, the “Strut-Plus Rewards” promotion, which runs in May and June, offers incentives to parts professionals for selling certain KYB products, while “Earn With KYB” in August and September incentivizes technicians and service writers.

Adds Shaffer: “Every year we try to make sure we have a promotion for every person in the distribution chain who can effectively sell our products.”

‘Get Dirty’ With Federated

If you want to learn a thing or two about crafting clever, engaging promotions, look no further than the automotive aftermarket’s program groups. Over the years, these promotions have created unforgettable experiences for contest winners. For Phil Moore, senior vice president at Federated Auto Parts, one that comes to mind is “Get Dirty With Kenny.”

Federated’s long-running “Get Dirty With Kenny” promotion gives a few lucky Federated Car Care Center customers the chance to roll up their sleeves and romp around the dirt track with retired NASCAR driver Ken Schrader, known as “The General” of dirt-track racing.

Not surprisingly, it’s one of Federated’s most popular promotions. It’s one of Moore’s personal favorites as well, “because it has all the elements of a good promotion: a great name; a unique customer experience; a personality in Kenny Schrader who connects with customers on a personal level; and a way for our members and vendor partners to get involved and interact with their customers.”

When Federated first launched “Get Dirty With Kenny,” it started as an all-expenses-paid weekend trip to St. Louis for a dirt-track driving experience. Every year, Federated has enhanced the weekend, adding a St. Louis Cardinals baseball game, a Budweiser Brewery tour and a World of Outlaws race to the itinerary. To ratchet up the fun, the weekend has included celebrities such as NASCAR drivers Justin Allgaier and Kenny Wallace and “Two Guys Garage” hosts Kevin Byrd and Willie B.

“From there, we have taken the ‘GDWK’ experience on the road and conduct events for members at local dirt tracks from coast to coast,” Moore adds. “We can involve more people this way. Members and supporting vendors turn out, have some fun and mingle with their best customers. They make a great time of it and our customers can have the experience while only missing a half-day away from the shop.

“The fact that ‘GDWK’ has evolved the way that it has tells us it’s a popular promotion. In fact, we’ve never had one winner turn down the trip.”

Like the other program groups, Federated has an active slate of promotions every year, from “Free Fuel Fridays” to “12 Days of Christmas.” In January, Federated announced the two grand-prize winners of its “Be a Federated Fan” contest. On Sept. 11, the two Federated Car Care Center members will get to watch the NASCAR Federated Auto Parts 400 from a luxury suite at Richmond Raceway in Richmond, Virginia.

Generating ideas for Federated’s many promotions is one of the fun parts of the job for the Federated staff, Moore says.

“Federated has a tremendous staff, and we work with some very creative people at Maximum Marketing who always come to us with great ideas,” Moore explains. “And then we encourage everyone on the Federated team to get involved in the development process.

“Some of our best promotions have come from group meetings where we take a simple concept and build upon it. Imagine a conference table with staff members, not only from marketing, but accounting, sales, purchasing, IT – all facets of the business. Sometimes you get some crazy ideas, but that’s what makes it fun. Federated has fostered a culture based on engagement and involvement, and at our meetings, marketing is the fun part. Everyone likes to participate in the creative process, and it seems like there must be a marketing person deep down in each of us.”

So You Wanna Win A Tesla?