Snap-on is first company to sponsor solo Honor Flights to Washington, D.C., for its associates and franchisees who served in World War II and the Korean and Vietnam Wars.

WASHINGTON, D.C. – Snap-on Inc. recently hosted its initial “solo” Honor Flight for the company’s associates and franchisees who served in World War II, the Korean War and the Vietnam War, in Washington, D.C. Snap-on is the first company to partner with Honor Flight Network to send its own military veterans to visit the Washington, D.C., memorials erected in their honor. 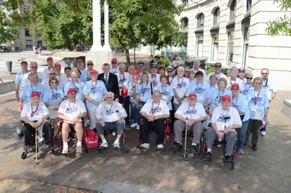 Snap-on formally announced its sponsorship of the “Honor Flight Network” with a $50,000 donation to the organization earlier this year. As a result of that donation, more than 50 associates and franchisees will participate in Honor Flights to view their memorials. Twenty-five veterans, traveling from 13 different states, were in the nation’s capital as a part of the first solo flight; among them is William Rayburn, former chairman and CEO of Snap-on Inc. and a WWII veteran. The group was joined by Snap-on chairman and CEO Nick Pinchuk, also a veteran.

“This is an extraordinary day for Snap-on joining with the Honor Flight Network in recognizing our veterans who have given so much,” said Pinchuk. "Today, we’re saluting these patriots by giving them a chance to visit the memorials in Washington, D.C., dedicated to their service by a grateful nation. It means so much to those who’ve served. We’re delighted to have already scheduled two Honor Flights and to make an additional donation sponsoring two more. Snap-on is a great American company, and it’s a privilege for us to thank our veterans in this way. They protected our freedom and helped make possible the America we love and enjoy today. These Honor Flights give us the opportunity to show them that their sacrifice has not been forgotten.”

Due to the overwhelming number of veterans who applied to be a part of the solo Honor Flights, Snap-on announced it will make a second $50,000 donation to fund two additional flights scheduled for spring 2014.

Registration Open For AAPEX 2020
Connect with us