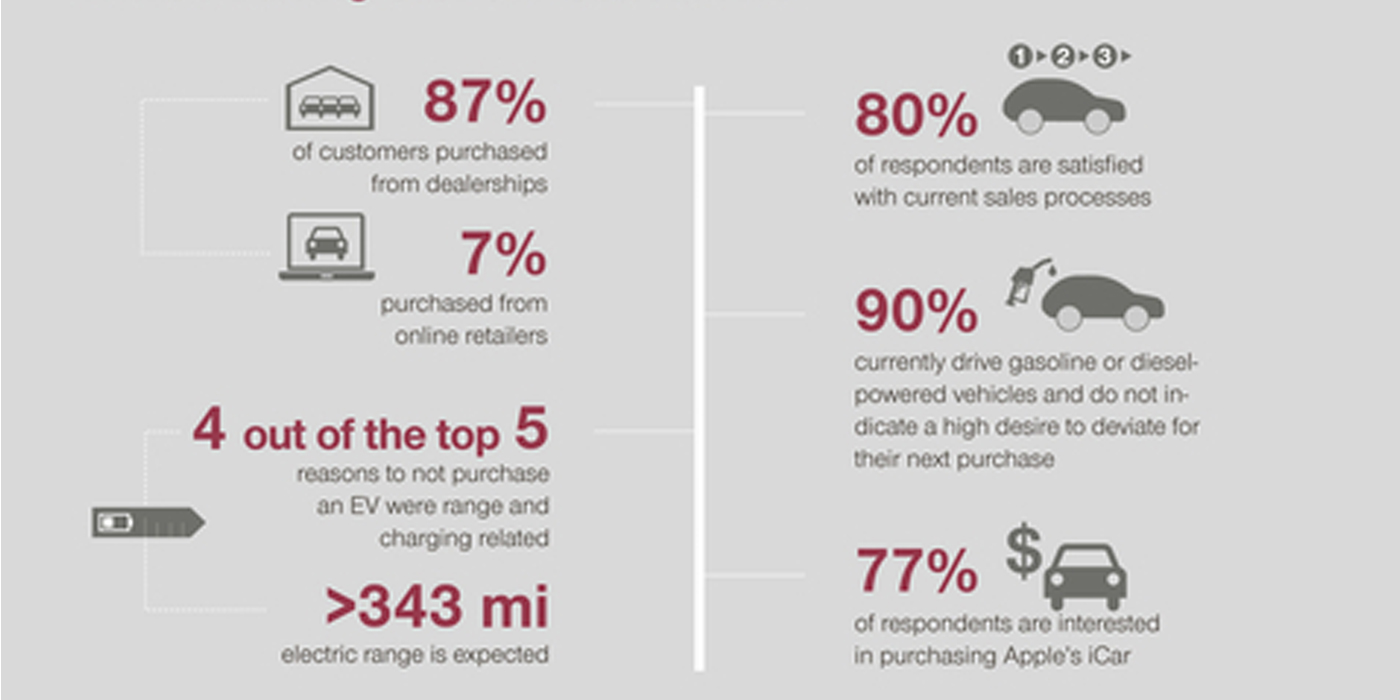 The survey covered 1,529 U.S. consumers as part of a global study that reached 10,000 consumers across 14 markets. The study also highlighted that many still prioritize conventional dealerships and purchasing models when it comes to their cars.

One of the key findings is that consumers are cautiously open to data sharing. Approximately 2/3 of respondents were open to some form of data sharing, especially regarding vehicle data (e.g., fuel consumption and technical conditions) rather than personal data (e.g., destination). A majority of the respondents (60 percent) are willing to share personal data based on varied levels of compensation and restrictions.

There was more hesitancy over in-car advertising: nearly half (49 percent) of Americans are opposed altogether. Only 25 percent of all consumers were open to the idea in some form, however, requested a discount or voucher in exchange.

Another finding in the Automotive Consumer Survey is that electric vehicles are gaining acceptance but will need to power up to boost sales.

Ninety percent of U.S. respondents currently drive gasoline or diesel-powered vehicles and will consider a gas-powered vehicle for a new-car purchase, the survey found, and price, range, and charging infrastructure were the key reasons given by respondents for not considering an EV. On average, respondents expect a driving range of over 343 miles (552 km).

“It is clear to us that the future of the automotive industry is electric, but consumer sentiment indicates that this transition will be measured, dependent upon (among other factors) the proliferation of supporting infrastructure and the advancement of battery technology,” said Dylan Grien, manager at Simon-Kucher.

Autonomous driving technology gaining traction, according to the study, but reactions to autonomous driving technology remain mixed. Forty-five percent of respondents indicated excitement about the technology, while 32 percent admitted fear of autonomous technology. System malfunctions, failure to react to human behavior, and the possibility of the car being hacked or externally controlled were the top concerns. Though the overall view is that autonomous technology is a positive move technologically and will become standard in the coming years, most respondents strongly perceived autonomous vehicles as a luxury and believe they will be too expensive.

Lastly, the study identified three consumer segments in the market, based on their opinions on EVs, autonomous driving and other innovative technologies: Early Adopters, Mainstream Progressists and Traditionalists. While revealing significantly more enthusiasm for all modern technologies, Early Adopters also appeared more brand-agnostic and value-driven in their purchasing criteria. Keeping a close eye on changing opinions and behavior in this customer segment can provide clues for where the market will develop next.

*About the study:The Automotive Consumer Survey (Global) was conducted by Simon-Kucher & Partners in October 2021. Almost 10,000 car customers from across 14 countries (Australia, Belgium, China, Denmark, France, Germany, Italy, Japan, Mexico, Norway, Spain, Sweden, UK, and US) were surveyed about their product and purchase preferences, and attitudes towards new mobility concepts. This study was led by a group of experts from Simon-Kucher’s global Automotive practice.

Advertisement
In this article:innovation, Survey
Print
Up Next:

Overheard: The Most Expensive Car to Fill up