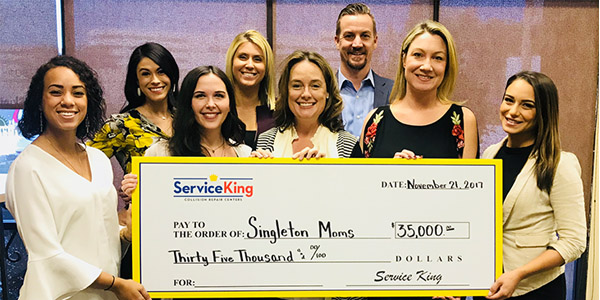 The contribution, made possible through the efforts of the fourth annual Service King of Phoenix Charity Golf Tournament, continues the company’s longtime partnership with Singleton Moms –­ an organization that supports single parents facing advanced stages of cancer. 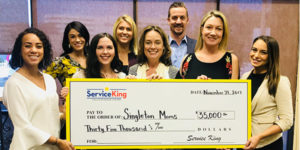 Service King Collision Repair Centers, with the help of its Phoenix teammates, recently presented a donation in the amount of $35,000 to Singleton Moms as part of the organization’s ongoing Service King Cares initiative.

The contribution, made possible through the efforts of the fourth annual Service King of Phoenix Charity Golf Tournament, continues the company’s longtime partnership with Singleton Moms ­– an organization that supports single parents facing advanced stages of cancer.

“The partnership with Service King over the past four years has been instrumental in our growth as an organization,” said Jody Farley, executive director of Singleton Moms. “In fact, we are moving into a larger facility now that will help us further our mission, and I know that Service King has played a big role in that for us.”

The tournament, hosted on Oct. 27, attracted more than 140 golfers from around the Phoenix area in support of the organization. Throughout its four-year history, donations from the Service King Phoenix Charity Golf Tournaments have totaled more than $115,000 for the Singleton Moms organization.

“The Service King family is privileged to join hands with a great organization like Singleton Moms,” said Ryan Downs, Service King market vice president. “The impact they make across the Phoenix community is profound. It’s our hope this small token of our appreciation of their work furthers their mission to help single parents and their families battling cancer.”

Through regular local volunteer efforts across the country, Service King Cares contributed more than $750,000 to nearly 100 non-profit organizations in 2016. The company also is a longtime partner with the National Breast Cancer Foundation and National Auto Body Council’s Recycled Rides initiative that provides vehicles to families in need.

Advertisement
In this article:Cancer, repair, service king
Print
Up Next: