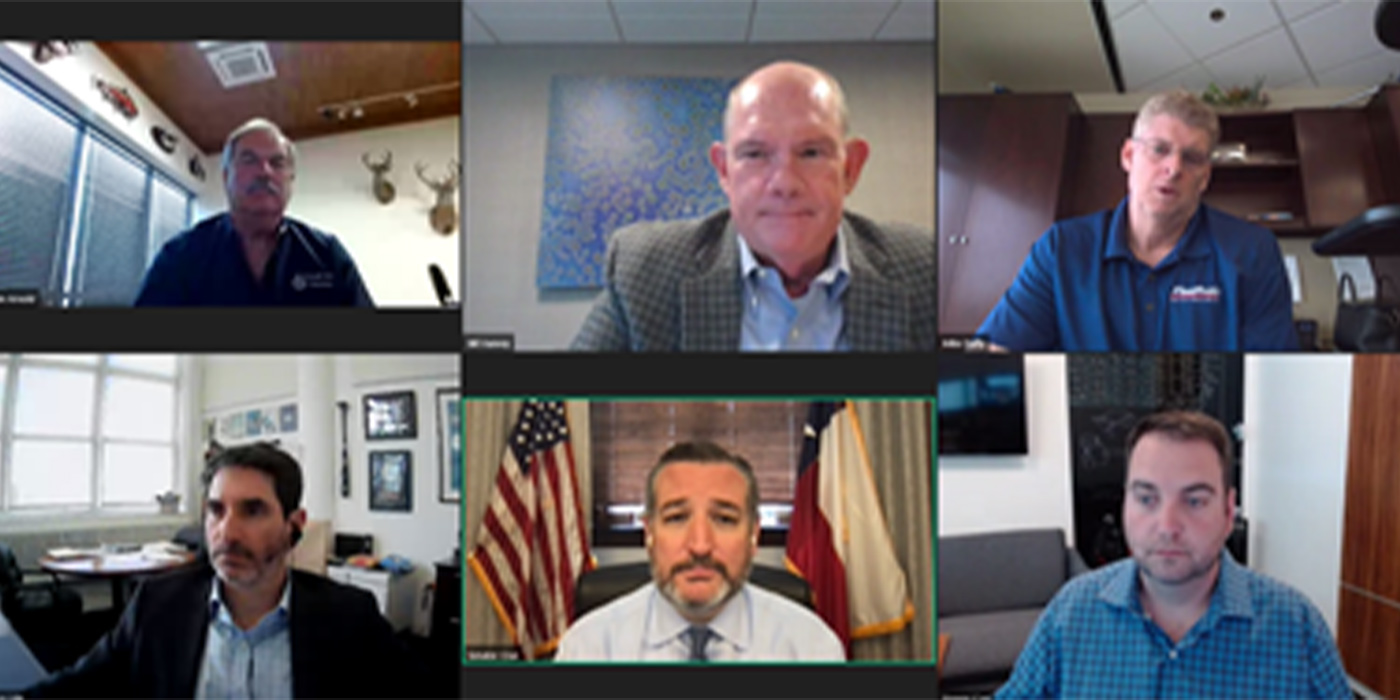 Sen. Cruz is part of the Senate Commerce Committee, which controls the fate of Right to Repair in the U.S. Senate.

On March 29, Sen. Ted Cruz (R-TX) joined Texas-based auto care industry CEOs for an exclusive meeting to discuss the critical issues facing the auto care industry and to share what Congress is doing to address them. Sen. Cruz is a senior member of the Senate Commerce Committee, which controls the fate of Right to Repair legislation in the United States Senate.

Bill Hanvey, president and CEO, Auto Care Association, opened the roundtable discussion by emphasizing the importance of meeting with legislators to simply share information about industry business and economic impacts. “As technology becomes almost a weapon for the automakers, it’s critical for all of us to be able to have a dialogue with our local representatives or senators so that they understand the issues that are on the table for our industry,” Hanvey said.

In Texas alone, the auto care industry provides nearly 200,000 jobs and nearly $40 billion to the Texas economy, including 266 manufacturing facilities, 17,000 wholesale locations, 11,000 retail locations and nearly 21,000 service locations within the great state of Texas that pay $13.4 billion in wages. “We are not only an economic powerhouse in the nation, but also in the state,” said Hanvey.

Access to affordable vehicle repair
FleetPride’s Duffy asked Senator Cruz for his position on access to quality affordable motor vehicle repair and his perspective on vehicle owners still continuing to have that ability to get their vehicles repaired by independent repair shops. Duffy also asked the senator what the aftermarket industry can do to advance a bill like the REPAIR Act, federal legislation introduced in the U.S. House last month, and how to push it across the goal line.

Senator Cruz responded that he “strongly support[s] the right to repair your own vehicle, your own car, your own truck…and get whoever you want to repair it. That’s a fundamental question of individual liberty and individual property rights. But, it’s also a question of small businesses. We have so many small businesses that provide jobs and lower cost repairs. I am a passionate supporter of small business. I think the key to jobs is small businesses. Two-thirds of all new jobs come from small businesses,” said Cruz. When it came to legislation supporting the right to repair, Senator Cruz stated that he needed to look more closely at the details within the legislation, but he was “happy to commit to working with [the industry] to address the issue in a way that makes sense and ensure that people have the right to make their own repair decisions.”

Supply chain disruptions
Standard Motor Products’ Sills shared with the senator that his business, like many in the industry, has been dealing with significant supply chain disruption. “The ports have been facing nearly insurmountable backlogs on both coasts, causing significant delays, sometimes months, and it’s really impacting it all the way down to the consumer. Sills asked Senator Cruz, “What do you think is needed, both in the short term and the long term, to address this crisis?”

Sen. Cruz responded that, “the supply chain crisis is real, and it’s putting real consequences and burdens on small businesses and consumers across the country. There are a lot of factors that have contributed to the crisis.” After elaborating on the ripple effect of the pandemic, shutdowns, inflation and more, the senator called for “an examination of the factors that have led to this crisis” and committed to “calling hearings and examining the root causes and the specific solutions to address it,” should Republicans retake the U.S. Senate “because it’s causing a world of hurt, both for small businesses and for consumers.”

Workforce gap
Christian Brothers Automotive’s Carr shared that the aftermarket industry thrives with a highly technical and well-trained workforce and asked what Congress can do to help close the workforce gap of 200,000 technicians nationwide.

Senator Cruz expressed his deep passion for education and detailed his work in support of it, including introducing “legislation that would create a federal tax credit of $10 billion a year, totaling $100 billion over the next 10 years for contributions to scholarship granting organizations in the state—half of which is dedicated to workforce development to training for things like being an auto technician and advanced work skills to help adults get the skills they need to compete in today’s marketplace. If it passes it will be the most far-reaching federal education reform since the G.I. Bill and would dramatically expand the number of auto technicians that are available across Texas and across the country,” said Sen. Cruz.

Ripple effect of rising fuel prices
Arnold Oil’s Jim Arnold raised the issue of currently skyrocketing prices for crude oil, gas and natural gas, underscoring the point that the increased cost impacts not just the prices at the pump, but also rubber and plastic goods. Arnold asked for the senator’s thoughts on the short- and long-term effects of these disruptions and what could be done.

Sen. Cruz shared that he believes energy independence is key to American prosperity in the wake of rising energy prices. “The single most effective thing we could do is reach oil, gas and energy independence, which would take away Russia’s customers,” said Senator Cruz. “What we ought to do is step up and get Europe to cancel those contracts with Russia. If American energy production steps up and fills the gap, there is nothing we could do that would more effectively defeat Russia and Putin than to take away the billions in revenue he’s making from energy right now. I’ve spent a decade being the leading defender of oil and gas, the leading defender of energy, in the United States Senate. I think energy—and energy independence—is the key to prosperity. It’s the key to abundance. It’s the key.”

Advertisement
In this article:Auto Care Association, Legislation, U.S. Senate
Print
Up Next: