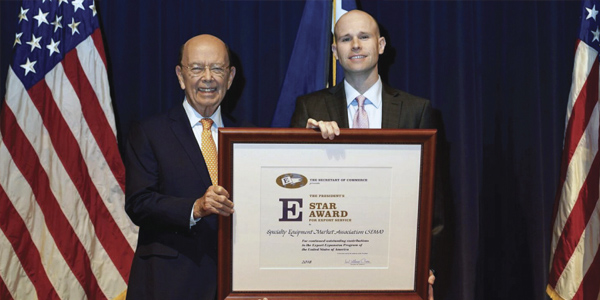 There were 43 U.S. companies and organizations honored from across the country with the President’s “E” Award for their role in strengthening the U.S. economy by sharing American ingenuity outside of U.S. borders. SEMA was the only second-time winner in the export service category. 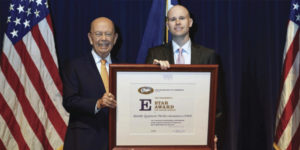 Eric Snyder, SEMA’s congressional affairs director, received the “E” Star Award from U.S. Department of Commerce Secretary Wilbur Ross. U.S. Secretary of Commerce Wilbur Ross presented SEMA with the President’s “E” Star Award for Export Service at a ceremony in Washington, D.C. The President’s “E” Award is the highest recognition any U.S. entity can receive for making a significant contribution to the expansion of U.S. exports. Secretary Ross honored 43 U.S. companies and organizations from across the country with the President’s “E” Award for their role in strengthening the U.S. economy by sharing American ingenuity outside of U.S. borders. SEMA was the only second-time winner in the export service category.

“SEMA has demonstrated a sustained commitment to export expansion,” said Secretary Wilbur Ross in his congratulatory letter to the trade association. “The ‘E’ Awards Committee was very impressed with SEMA’s use of partnerships to help create effective business-to-business matchmaking opportunities for its clients. The organization’s measurement of exports supported by its programs was also particularly notable. SEMA’s achievements have undoubtedly contributed to national export expansion efforts that support the U.S. economy and create American jobs.”

SEMA President and CEO Chris Kersting noted, “SEMA’s international programs have helped scores of SEMA members expand sales into overseas markets. ‘E’ Star recognition is an honor and an endorsement of services that I urge more members to utilize.”

The President’s “E” Award dates back to 1961 when President Kennedy signed an executive order reviving the World War II “E” symbol of excellence to honor and provide recognition to America’s exporters. Criteria for the award is based on four years of successive export growth and case studies that demonstrate valuable support to exporters resulting in increased exports for the company’s clients.

“SEMA greatly values its partnership with the U.S. Department of Commerce,” said Linda Spencer, SEMA senior director of international and government affairs. “For example, the International Trade Administration provides grants to companies participating in SEMA’s overseas trade missions to help defray the costs to attend. In addition, the Department of Commerce has proven to be a valuable resource to SEMA-member companies by leading delegations of overseas buyers to attend SEMA events, providing in-country briefings on key markets and offering assistance to SEMA members encountering hurdles selling overseas on issues ranging from intellectual property concerns to signing exclusive contracts.”

For more information on SEMA’s year-round programs and resources, including an upcoming trip to Shanghai, and a series of roundtables focused on export opportunities in the Middle East, Australia, Latin America and China, contact Linda Spencer at [email protected] or visit sema.org/international.

Advertisement
In this article:Department of Commerce, SEMA
Print
Up Next:

Scania To Participate In ‘Trucks For German eHighways’ Research Project

JLM Lubricants Adds to Transmission Products Line
Connect with us