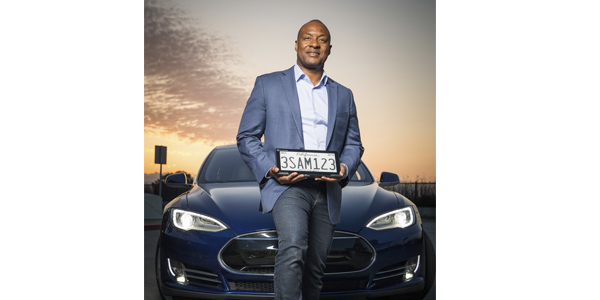 Reviver Auto, creator of the Rplate, the world’s first digital license plate, announced this week that the City of Sacramento has outfitted its auto fleet of Chevy Bolts with Rplate Pro’s. The City has installed 24 of the plates so far and will be installing another 11 when it receives more of the vehicles.

Mayor Darrell Steinberg said the installation of digital plates is another step in the city’s evolution into a testing ground for clean vehicle technologies. Last week, the city welcomed Highlands Electric, which makes motors much lighter and more compact than those currently being used in electric vehicles.

“Sacramento intends to be the state and national leader on alternative fuel technology, on autonomous vehicles, on research and development and on all things innovation,” said Mayor Steinberg.

Mark Stevens, the city’s fleet manager, said the digital plates allow the city to oversee the movements and mileage of electric vehicles. The plates also will issue a signal if they are stolen. The Bolts are being used in various city departments, including public works, utilities and community development.

Stevens added the plates also can be used to display messages, such as public service announcements and Amber Alerts. Messages will not obscure the license plate number when the car is being driven.

The new digital plates cost slightly less than the GPS system the city uses for its gas-powered vehicles, said Stevens.

“The Rplate Pro offers a host of capabilities that will not only help us better manage our fleet, but will also serve a critical role in communicating with our residents,” said Stevens. He noted the city would continue installing digital plates as it adds more electric vehicles to comply with the city’s sustainability requirements.

To see more of the Rplate Pro’s connectivity capabilities, watch this video.

“Reviver Auto has brought license plates into the 21st century, offering modern conveniences to improve the overall driving experience,” said Neville Boston, CEO, Reviver Auto, which is based in Foster City, California. “We are proud to team up with the City of Sacramento and applaud their leadership as they implement the Rplate Pro into their smart city infrastructure.”

Sacramento’s adoption of the Rplate Pro is part of its ongoing commitment to becoming a hub for innovation and technology. The city has launched the Sacramento Urban Technology Lab, a framework within which entrepreneurs, advanced technology businesses, and academic institutions collaborate to solve real world problems and accelerate quality of life improvements. Reviver Auto recently took part in “Tech Night,” a theme event hosted by the Sacramento Urban Technology Lab and the Sacramento Kings basketball team to showcase cutting-edge technology and celebrate the King’s dedication to innovation.

California was the first state to adopt the Rplate Pro, followed by the Arizona Department of Transportation testing and enabling legislation has been passed to pilot or test digital license plates in Texas, Florida and Washington State at the Department of Motor Vehicles’ discretion. Reviver Auto also has reached a proof of concept agreement to bring the digital license plates to Dubai, United Arab Emirates.