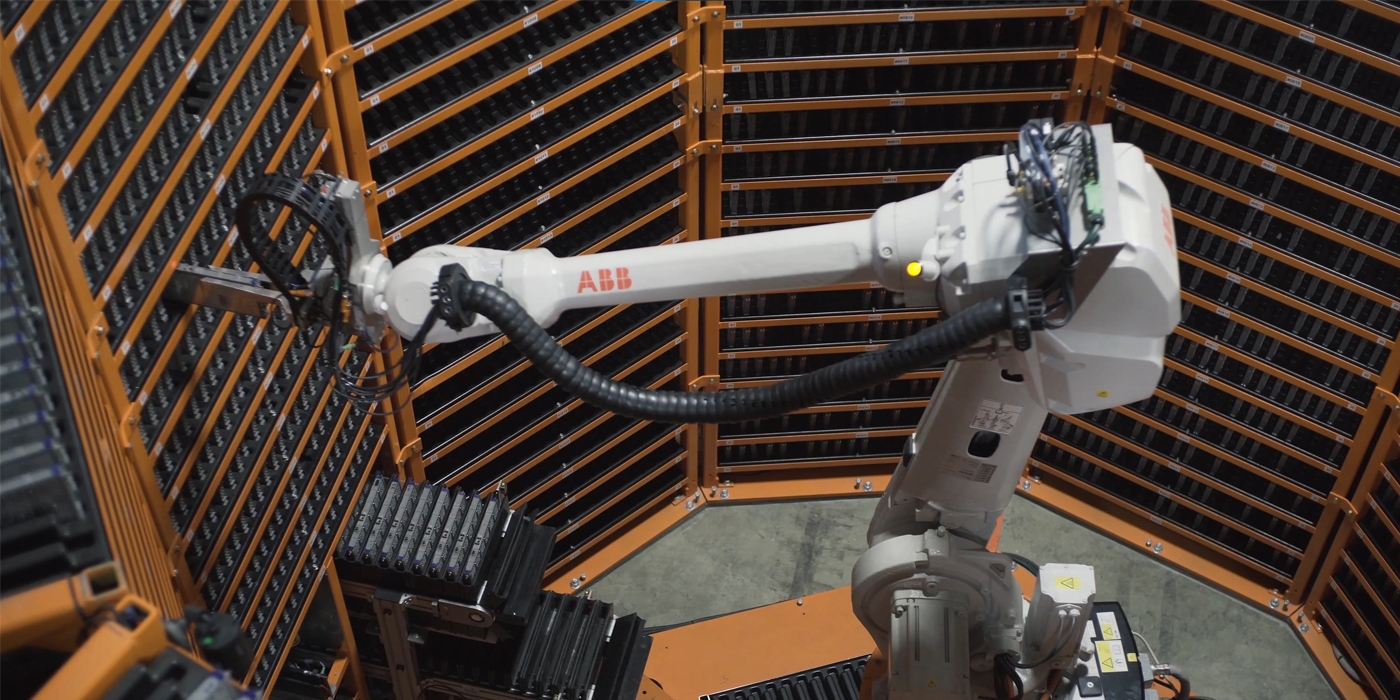 Dorman Products Inc. is one of the leading suppliers of replacement parts and fasteners for passenger cars, light trucks and heavy-duty trucks in the automotive aftermarket. Publicly traded on the NASDAQ stock exchange, Dorman has six warehouse and office facilities located throughout the United States, Canada, China, Taiwan and India.

The company’s Sanford, North Carolina, facility focuses on battery-pack remanufacturing for Toyota Prius hybrid-drive vehicles, offering an economical option for battery replacement at a stage when a new OEM battery would likely exceed the residual value of the vehicle.

Dorman was the first company to remanufacture and restore hybrid-vehicle battery packs for the mass aftermarket, a process that typically is more comprehensive and reliable than simple reconditioning. But it is a complex undertaking.

Each Toyota Prius battery pack has 28 individual modules, and with the composition properties slightly different for each battery module, it often took culling through up to 100 refurbished modules to match the required set of parameters for a specific battery pack.

The battery module matching process, initially performed manually, was very time-consuming and prone to error. It required numerous rounds of pulling and testing modules from the reconditioned storage bins to find 14 perfectly matched pairs for a single battery pack. The cycle time couldn’t keep up with the demand and the quality was insufficient.

“Customers were not having an acceptable experience with the product, orders were taking too long to fill and there were too many returns,” said Michael Menta, Dorman’s vice president of engineering. “We had to take a step back, evaluate the entire process from beginning to end, find out where the breakdowns were occurring, and mandate that nothing leave the factory that isn’t 100% commensurate to Dorman’s latest standards.”

As part of the system overhaul, Dorman internalized all facets of the operation. It automated the upfront grading process of incoming modules, as well as the program that tells the operator which modules to physically pick. It also streamlined much of the battery disassembly and assembly functions.

Despite marked improvements in product integrity as a result of the system upgrades, the manual module-matching function remained a drag on performance, both in the speed of order fulfilment and in achieving 100% quality.

No matter how many people Dorman could assign to the matching process, it would remain highly repetitive, monotonous work, susceptible to periodic human error. Faced with this challenge in overhauling the hybrid-battery remanufacturing operation, Menta and his team decided to investigate custom automation options.

After a consultation with Production Systems Automation (PSA), a manufacturing engineering firm near its Colmar, Pennsylvania, headquarters, Dorman initiated its first foray into robotic automation.

“We had no preconceived notion of what form an automated module-matching system would take or if it was even possible,” Menta said. “A business contact had referred me to PSA, so we brought them in to see what sort of concepts they could propose.”

One concept featured a six-axis industrial robot on a gantry track and a large wall of storage slots. It allowed for a maximum quantity of reconditioned battery modules to be housed in the “library,” but required a large allotment of space on the production floor and very complex XYZ programming. A scaled-down version of the design without the gantry occupied a smaller footprint but the compromise in capacity was unsustainable.

In an effort to maximize capacity and minimize the floor-space requirement, Lesnefsky continued to experiment with designs in RobotStudio, eventually coming up with a system of 10 rectangular storage shelves arranged in a circle, with a robot in the middle. Perched on a stationary pedestal, the robot arm could access 5,000 module storage slots arranged in the “decagon” configuration by moving up and down, and 180 degrees in either direction.

“The simulations that can be created in RobotStudio are incredibly realistic, virtually identical to how a concept and its various components will perform on the factory floor,” Lesnefsky said. “I was able to experiment with various concepts, complete with accurate reads on reach, speed, distance, conveyor location, etc., allowing us to optimize the layout and robot paths to achieve the best cycle times. RobotStudio is an incredible tool for system design, proof of concept and ultimately programming robots.”

Based on the verifications provided by RobotStudio, PSA and Dorman agreed that the circular design was the optimal solution.

The battery module storage and retrieval library catalogs 5,000 battery modules that have been refurbished, charged, tested and graded. An ABB IRB 4600 six-axis industrial robot (40 kg payload /2.55 m reach) is surrounded by the shelves, naturally isolating it from workers and other traffic in the plant. On one side of the cell is an opening with a custom-built, two-tiered, servo operated conveyor, one level bringing modules in to be catalogued, another shuttling modules out for potential matching in an individual battery pack.

A small door opposite the conveyor opening allows staff members to enter the cell. All openings are integrated with the safety system to require a powering down of the cell before any person enters for cleaning, maintenance or to manually pick a battery.

Each battery module that comes into the facility goes through a testing regiment that determines its general characteristics and whether it is suitable for a reconditioned battery pack. Good modules get graded and put into the cataloguing system, bad cells get recycled.

PSA custom-designed an end-of-arm-tool (EOAT) with a Schunk gripper, attached to a linear slide that extends the robot reach to access the top row of the circular storage matrix. The EOAT also features sensors to assure that modules are picked up correctly to avoid any collisions. If any impact occurs, a module must be discarded.

The robot presents modules to a SICK Inspector camera as they both enter and exit the storage system.

The camera scans a QR code on each module upon entering the storage matrix to catalog information in a master database about its grade, entry date and storage location. The robot then places it into the designated storage slot.

When the system calls a module out of the library for potential matching, the robot picks it from the shelf, scans the QR code to ensure it has picked the right module, tests that it is fully charged and then places it on the discharge conveyor for routing to an operator. The QR code scan also determines if the module is facing in the correct direction for the next step in the process. If the system finds the module was loaded in the wrong direction, it is able to set the module down and automatically re-grip it without any operator interaction.

After the camera scans the QR code, the module is sent to a testing station PSA designed that is connected to the database software for gathering the parameters used for matching the cells in a battery pack.

The database, housed within a LabVIEW software program, contains all the information on each module in the library. The software also has a feature that matches the modules to the needs of a particular battery, in order to make the best pack.

As battery modules are needed, the software interfaces with the ABB IRC 5 robot controller through a PLC, which tells the robot which storage slot to retrieve the module. The LabVIEW program, the PLC and the robot controller all work to together to control the entire operation, including the conveyors and the safety mechanisms.

“Several parameters have to be met for a module to be considered acceptable, and then depending on its level of acceptance, it gets graded and put into the storage tower,” Menta said. “When the robot begins the matching process, the LabVIEW software program instructs the robot which modules to pull and in what order they need to be pulled, based on the specs of the specific order. There are multiple proprietary parameters that pair the modules. Modules that aren’t the right fit for one battery could be a good fit for another battery.”

If a module isn’t appropriate for a particular battery pack, the robot puts it back in its original slot for potential future matching. Over time a lone module may not be selected, meaning its parameters don’t quite line up properly with the other modules. The system monitors this, and after several months of sitting idle or failed matching attempts, it will instruct the robot to pull and purge the module, thus keeping the inventory filled with healthy modules.

“In addition to developing an innovative concept for the automating such a complex process, PSA was instrumental in identifying the necessary system components and making sure the communication between them was complete and seamless,” Menta said. “The ABB IRC 5 robot controller interfacing with the PLC and the LabVIEW software program is the central brain of the operation.”

The system runs in constant motion two shifts each weekday and one shift each weekend day, for a total of 104 hours per week. It works in directional batches, storing modules into the library for a period of time, and then changing course and retrieving modules for another block of time. The robot is able to store or retrieve a module every eight seconds.

Order-fulfilment cycle times and quality have reached the standards that Menta and his team set out to achieve. The system scans through the entire module inventory to more easily better identify potential module matches, culling through as few as 30 modules for a single battery pack. This mitigates the fulfillment delays caused by pulling unqualified modules and the errors caused by building battery packs with less than perfect module matches.

The resulting production and quality improvements are significant. Battery build time has decreased by 66%, rendering a 300% increase in daily output of finished battery packs. Warranty returns have diminished by 27%.

As an added bonus, Dorman employees who performed the manual matching regiment have been moved to more rewarding jobs in the plant, some managing the newly automated operation.

“The circular robotic storage tower has dramatically improved our remanufactured hybrid-battery-pack business. We went from an exceedingly drawn-out manual process, endlessly pulling modules from bins to find precise matches, to the automated process, which is much easier on our staff,” Menta said. “The robotic library also provides us better control and organization of our battery-module inventory. If a module isn’t viable it doesn’t remain on the shelves for very long.”

With the prevalence of fully electric vehicles set to accelerate over the next few years, the potential for transitioning into remanufacturing differing types of battery packs is quite lucrative. The tower storage rack slots could be altered to accommodate lithium-ion battery modules, and with track-motion technology, the robot could access a more expansive storage network.

“Our main goal is always to design a solution that satisfies a customer’s current need,” Lesnefsky said. “But because of the inherent flexibility of industrial robots and the power of RobotStudio, most of systems are designed to adapt to future opportunities.”

Advertisement
In this article:ABB Robotics, Dorman, Remanufacturing, Robotics
Print
Up Next: