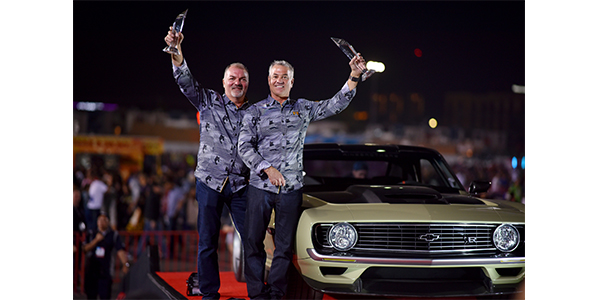 For the second year in a row, a 1969 Chevrolet Camaro beat out nearly 300 entrants in the internationally recognized competition that has unfolded during the SEMA Show in Las Vegas.

Mike and Jim Ring of Ringbrothers in Spring Green, Wisconsin, took the top prize in the sixth-annual SEMA Battle of the Builders competition, which concluded at SEMA Ignited, the official SEMA Show after-party designed to celebrate the builders and showcase products from the trade-only show.

For the second year in a row, a 1969 Chevrolet Camaro beat out nearly 300 entrants in the internationally recognized competition that has unfolded during the SEMA Show in Las Vegas. The Top 4 finalists for 2019 came down to Jim and Mike Ring with their 1969 Chevrolet Camaro (Hot Rod), Randy Borcherding with a 1955 Chevrolet truck (Truck/Off-Road), Louie Shefchik and his 1968 Iso Rivolta (Sport Compact), and Young Guns winner Brad Swaney with his 1971 Chevrolet C-10. Each and every builder brought their A game this year and was recognized with trophies in their respective classes.

The four finalists of this years’ competition will be highlighted along with other featured builders in a new TV special SEMA: Battle of the Builders, scheduled to debut on A+E Networks’ FYI and HISTORY’s DRIVE block in January 2020 (time and date to be announced).

The 2019 SEMA Battle of the Builders competition included submissions from seasoned builders as well as new customizers representing an elite group of individuals who demonstrated extreme talent, creativity and craftsmanship in modifying cars, trucks and SUVs. The Young Guns (builders 27 years and younger) category continues to evolve and expand, providing the next generation of builders with an opportunity to get their vehicles into the Battle of the Builders competition.

Industry experts RJ DeVera (Meguiar’s), Cam Miller (HS Customs) and Jeremiah Proffitt (Proffitt’s Resurrection Land Cruisers) were the competition’s judges and narrowed down the field of nearly 300 entries to the Top 10 in the remaining categories before selecting the Top 12 builds overall. The 12 finalists then took over judging duties and named the Ring brothers the overall winners.

For more information about the 2019 Battle of the Builders competition or the SEMA Young Guns program, visit www.sema.org/botb,  www.semayoungguns.com or SEMA’s YouTube channel.

Advertisement
In this article:SEMA Battle of the Builders
Print
Up Next:

Ring Brothers Overcome Competition At 2019 SEMA Battle Of The Builders