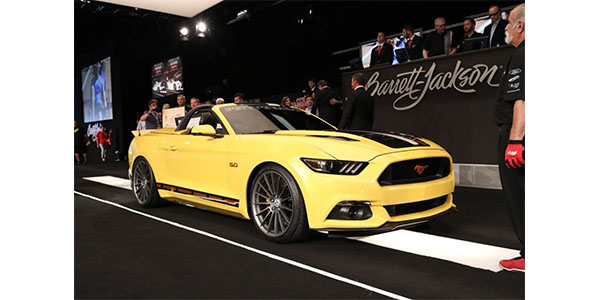 With a screaming yellow paint job, 825 hp and a Richard Petty signature on the dashboard, it would’ve been hard to miss the 2015 Ford Mustang GT convertible auctioned at the Barrett-Jackson event at the South Florida Fairgrounds.

With a screaming yellow paint job, 825 hp and a Richard Petty signature on the dashboard, it would’ve been hard to miss the 2015 Ford Mustang GT convertible auctioned at the Barrett-Jackson event at the South Florida Fairgrounds. One bidder didn’t miss his opportunity. And countless wounded veterans and their families will be empowered because of it.

The purchase of the 2015 Ford Mustang GT convertible at the April 11 auction in West Palm Beach raised $110,000 for Wounded Warrior Project.

“It was incredible to see the bids come in for this car because I knew how many injured veterans would be impacted,” said Wounded Warrior Project (WWP) CEO Lt. Gen. (Ret.) Mike Linnington. “Wounded Warrior Project is committed to improving the lives of millions of warriors and their families, and the money raised from this car will help tremendously.”

The award-winning Mustang brought in $110,000. Rick and Kathleen Yow owned the car, but they’re not accepting money for it. Instead, they’re donating the winning bid to WWP.

“No matter what, I was going to be happy,” said Rick Yow. “Any amount would have been better than none. It brought more than what we expected.”

This isn’t the first time the car has made a positive impact. Yow bought the car at a charity event in 2016. He wanted to make sure when he sold it, wounded warriors and their families benefited. “It’s so easy to forget about the military and what they do for us. It reaffirms why we wanted to do this,” he said.

In addition to the car, the winning bidder received a cowboy hat and a drawing of the car, both signed by Richard Petty. What wounded warriors and their families received is much more valuable. This vehicle will help them get where they need to go on their journeys to recovery.

To learn more about the Wounded Warrior project, visit woundedwarriorproject.org