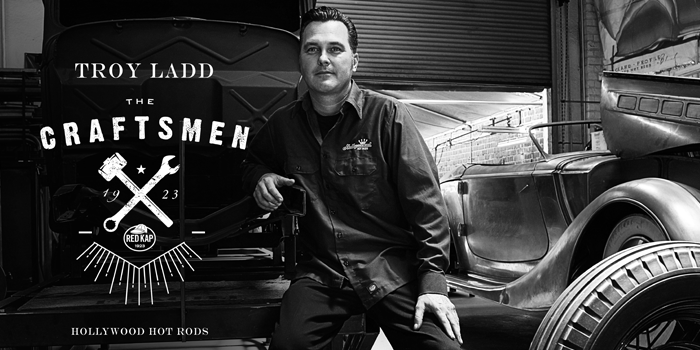 Ladd owns Hollywood Hot Rods in Burbank, California. He has been designing, building and restoring custom hot rods out of his shop for more than a decade. 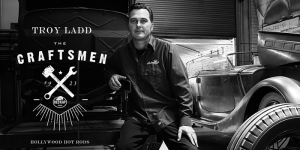 Red Kap, the world’s largest manufacturer of automotive workwear, has selected L.A. Roadsters 2012 Builder of the Year Troy Ladd as the third custom car icon to be added to the growing stable of Red Kap Craftsmen. Ladd owns Hollywood Hot Rods in Burbank, California. He has been designing, building and restoring custom hot rods out of his shop for more than a decade.

Ladd is known for his work on the TV shows “Rides” (2003), “Ultimate Car Build Off” (2010) and “American Icon: The Hot Rod” (2010). He’s been honored by enthusiast magazines like Hot Rod Magazine, Street Rodder Magazine and Rod & Custom. Other major wins include Grand National Roadster Show 2010 Builder of the Year and the Goodguys Rod & Custom Association/SEMA 2007 Trendsetter Award. The Newport Beach native’s trademark touch combines a strong reverence for past icons with an eye toward the future.

The Craftsmen is a video series profiling custom builders who embody Red Kap’s core values of heritage, craftsmanship and passion. “The Builder” is the first of two videos profiling Ladd. Viewers will hear Ladd’s unique stories while seeing the high-performance works of art that earned him a place among this elite group.

“Red Kap’s Craftsman series was developed to celebrate individuals who have a passion for building and follow those dreams to build, whether they are an expert or novice craftsman. They are not always professionals – many are weekend builders or hobbyists – but all have an unrelenting aspiration in a job done right, and we want to honor these individuals,” said Chris Holcombe, vice president and general manager of distributor brands, Red Kap.

The video, named “The Builder” is available here.