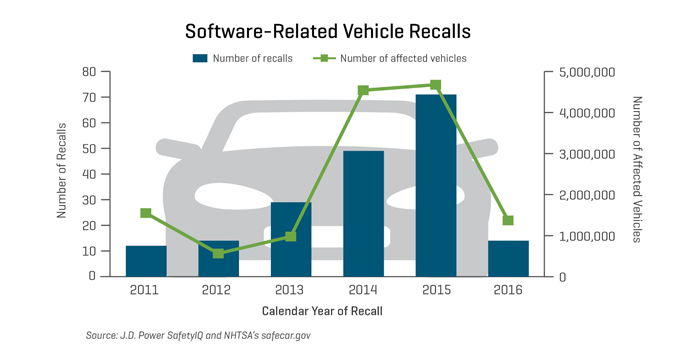 Consumer complaints about vehicle software have been growing steadily over the past several years, and 2016 is already on-pace with the record-setting level of 2015, according to data collected and released by J.D. Power through its SafetyIQ program.

So far in 2016, consumers have filed 202 formal complaints with the National Highway Traffic Safety Administration (NHTSA) pertaining to software that controls the technology prevalent in vehicles. NHTSA had received 204 software-related complaints during the same time a year ago, and logged a total of 615 for the full year in 2015, surpassing the previous annual record of 505 set in 2014. During the past five years, consumers have registered 2,011 complaints related to automotive software.

“Consumer complaints are the canaries in the coalmine for automobile manufacturers when it comes to anticipating future recalls and longer-term customer satisfaction,” said Renee Stephens, vice president of U.S. automotive at J.D. Power. “Software-related problems have become much more prevalent and, if not addressed, could begin to erode consumer trust in new automotive technology.”

Using SafetyIQ, an online application developed by J.D. Power that integrates NHTSA data with J.D. Power automotive data, investigators can see a connection between the complaints lodged and recall decisions. For example, the number of recalls is on the rise as well, up 45 percent between 2014 and 2015. To date, 189 separate software recalls have been issued in the past five years, impacting more than 13 million vehicles. According to analysis by manufacturers, 141 of these recalls presented a risk of crashing and 44 had a potential consequence of injury. Powertrain, electrical systems, engine cooling and vehicle control systems are the top areas for software complaints and recalls.

“Using this information from owner complaints, automakers can quickly identify whether the problem crosses model lines, components or even other companies with similar components/suppliers, and can begin to address the breadth of the concerns,” said Stephens. “Not every complaint registered by consumers becomes a recall, but they are all very important to manufacturers.”

Once complaints become a recall, by definition they involve a potential safety concern. At this point, only half of the vehicles affected by a software recall have been remedied; the other half may still be on the road.

Technical Service Bulletins On The Rise

Technical Service Bulletin (TSB) trends are a further indication of the increasing concerns raised about automotive software, according to J.D. Power. TSBs represent communication from the auto manufacturers to their dealer bodies on the recommended repair procedure for a consumer issue raised. The research company says manufacturers typically only use this form of communication if they’ve received many complaints, particularly if these complaints do not seem to be addressed through regular warranty repairs. SafetyIQ shows that TSBs pertaining to software issues increased from an average of 58 per year between 2006 and 2010 to an average of 160 per year from 2011 through 2015.

Still, software upgrades aren’t infallible. J.D. Power 2016 Vehicle Dependability Study (VDS) found that one-third of owners reporting a navigation system problem had a software upgrade within the past six months; however, 55 percent of these consumers said the upgrade did not fix the problem at all. “Even though there is an increasing potential to correct issues using software upgrades, consumer experienced has been mixed,” said Stephens. “Some owners are either not aware of the upgrades available or have reported limited success.”

With the amount of electrical componentry continuing to increase in vehicles — particularly as the industry is on its way to fully autonomous capability — J.D. Power says the trend of rising complaints, recalls and TSBs is both expected and worrisome. Understanding and addressing the complaints quickly is paramount, particularly as more vehicle functions are controlled by software. Having the right tools to see and react to these trends can help ensure a safer environment as these vehicle capabilities increase.