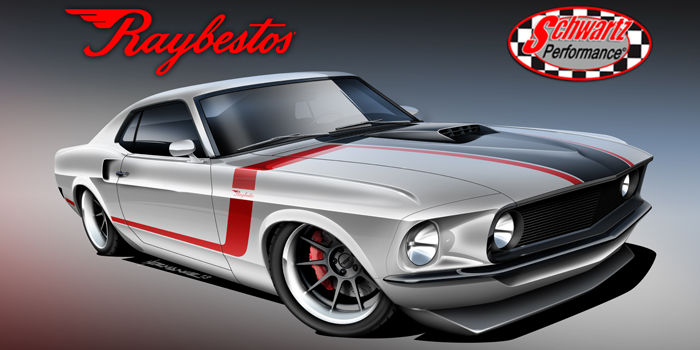 Once the restoration is complete, the Mustang will travel throughout North America next year before making its way to the 2016 AAPEX in Las Vegas, where it will be awarded to one lucky winner. 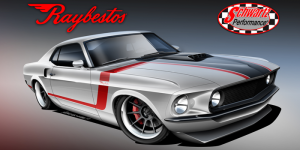 Teaming up with Schwartz Performance, Raybestos has announced that the highly-anticipated rendering of the Raybestos 1969 Ford Mustang Fastback is now available for viewing.

The rendering illustrates the classic Mustang colors and striping that will be found on the restored muscle car. As part of the complete restoration, Schwartz Performance will install its famous “G-Machine” bolt-in chassis as well as an off-the-shelf performance disc brake upgrade package, using Raybestos components and Element3 brake pads with Enhanced Hybrid Technology (EHT).

“As we rebuild this one-of-a-kind Raybestos ’69 Mustang Fastback, we are keeping in mind the Boss 302 Mustang of 1969,” said Jeff Schwartz, president of Schwartz Performance. “The classic colors and striping are true to the time and we will install a new Ford Coyote engine that is very similar to the one found in the modern Boss 302.”

Once the restoration is complete, the Mustang will travel throughout North America next year before making its way to the 2016 AAPEX in Las Vegas, where it will be awarded to one lucky winner.

“Raybestos and Mustang are the perfect match of history, leadership and innovation,” said Bruce Tartaglione, senior vice president of global sales and marketing for Brake Parts Inc. “After seeing the Mustang ‘before’ and the vision for its restoration, I know our customers and car enthusiasts everywhere will be interested in following the evolution of the Raybestos 1969 Mustang Fastback.”

To keep up with the progress of the Raybestos ’69 Mustang Fastback car build, including photos of the restoration and the addition of build partners and their performance components, follow the company on on its Facebook and Twitter platforms or visit RaybestosBuild.com.

SKF Kicks Off Its Manufacturing Day Activities With #21DaysofBlaney Promotion