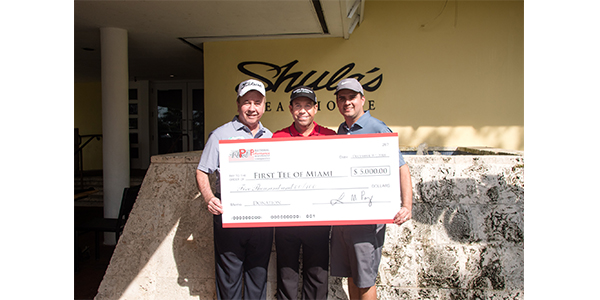 Proceeds from the event were donated to First Tee Miami.

In addition to group lessons, Compton also gave many players individual attention to improve their play.

Compton, who is a Miami native with several professional PGA wins and runner-up at the US Open, also was on the 8th tee where players could use his drive. Many teams picked up birdies as Eric’s drive had golfers there in one shot on a par-four.

Compton has a unique story on his way to his PGA prowess. Having two heart transplants during his life, he has shown and is recognized for his courage and perseverance and was given the PGA TOUR Courage Award in 2013. He is an advocate for organ donation and has established his own foundation to foster support.

Following the tournament, an affair was held at the original Shula’s Steak House founded by “The Coach” Don Shula of the ‘72 Dolphins. Following cocktails and dinner, awards, recognition and door prizes were presented. The team from Automotive Products won the event with the low score of 58.

Larry Pacey, president and CEO of NPW, said, “We are very grateful for the support of our sponsors who make this event possible. We certainly know that both our customers and our suppliers create business opportunities here as well as friendships as they spend time outside the normal business process. I want to thank Eric Compton for the generous use of his time spent with us. We are also glad to have the proceeds benefit the First Tee Miami. We look forward to our 30th event next year and 2019 will also be the 50th anniversary of the company.”

Advertisement
In this article:NPW
Print
Up Next:

Auto-Wares Group of Companies Announces 2018 Suppliers Of The Year