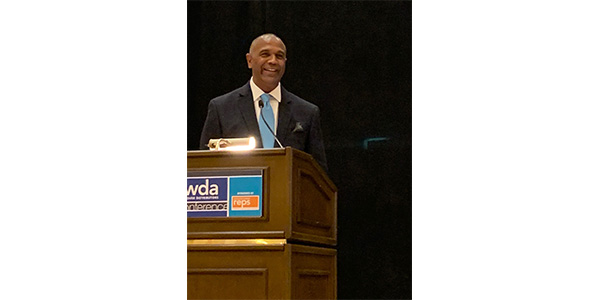 Chapman joined CPW as a store manager in 2000, when the company purchased Reith Auto Stores. Since then, Chapman has established himself as a customer-driven counterman, a tireless teammate and a consummate professional who embodies CPW’s mission to provide the “right parts at the right price, right now.”

Counterman, a Babcox Media publication, has selected Pete Chapman of Car Parts Warehouse (CPW) in Warrensville Heights, Ohio, as the 2019 Counter Professional of the Year, sponsored by WIX Filters.

Chapman joined CPW as a store manager in 2000, when the company purchased Reith Auto Stores. Since then, Chapman has established himself as a customer-driven counterman, a tireless teammate and a consummate professional who embodies CPW’s mission to provide the “right parts at the right price, right now.”

Chapman has been the manager of CPW’s highest-volume store since 2012, and is responsible for a substantial portion of its sales. There are more than 125 counter associates in the Car Parts Warehouse family, and Chapman is the top producer. Typically, his monthly sales are double what the next-highest sellers in the company generate.

Tony Di Fiore Jr., owner of CPW, describes Chapman as “a stand-out-from-the-crowd associate,” who often is the first person to show up for work and the last one to leave. Di Fiore Jr., whose parents started the business in 1975, notes that Chapman provides outstanding service to professional and DIY customers alike.

“It’s not only the professional installer that he takes care of,” Di Fiore Jr. says. “He also takes care of the soccer mom and everybody else walking through the door. And he takes his time with everybody to get them what they need.”

Over the years, Chapman has built a loyal following of wholesale and retail customers. On busy days, it’s not uncommon for his customers to wait a half-hour to speak with him, even if another counter associate is available. When he is able to get to that customer, he knows the right questions to ask – beyond the year, make and model of the vehicle – to make sure he understands their specific needs.

“He gets it right every time,” says Chris Curry, will call manager at the Warrensville Heights facility. “When customers walk away, they leave confident that the part they got is a good-quality part based on their needs and it’s priced where they need it to be at.”

One of the keys to Chapman’s success is the investment he makes in his customer relationships. During the holidays, he sends dozens of Christmas cards to his customers, and delivers personalized gifts to his top accounts. He hosts an annual Christmas Eve fish fry at CPW’s Warrensville Heights facility, where he and his wife, Laura, filet 50 pounds of catfish for his commercial and DIY customers.

Throughout the year, Chapman spends time with his customers at basketball, baseball and hockey games, thanks to CPW’s sponsorship of the Cleveland Cavaliers, Indians and Monsters. He credits Di Fiore for making those opportunities available. Says Chapman: “Tony has put me and the other managers in a nice spot.”

The youngest of 13 children, Chapman grew up in Fort Wayne, Indiana. From an early age, he was wrenching on cars in his dad’s shop, Chapman’s Auto Service. Every day, Chapman lives by the principles instilled by his father, Elvin, and his mother, Mary, who taught him to be fair, treat people as equals and always follow the Golden Rule.

“In the course of a day, I don’t have any indecision,” Chapman says. “There’s never a point when I think to myself, ‘Should I do it this way or should I do it that way?’ I already have the answer.”

Advertisement
In this article:AAPEX
Print
Up Next: