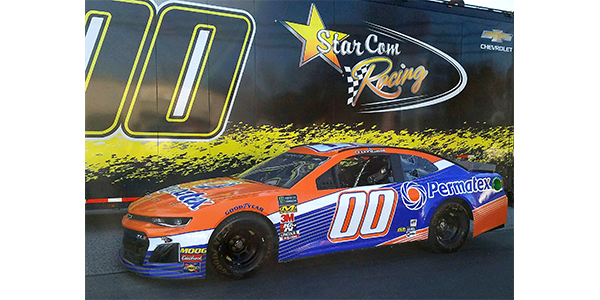 An early pioneer in motorsports, Permatex is credited as one of NASCAR’s first corporate sponsors.

Permatex will be returning to NASCAR competition with StarCom Racing at the 2019 Daytona 500 on Feb. 17. The sponsorship of StarCom’s 00 Camaro and driver, Landon Cassill, in the Monster Energy NASCAR Cup Series’ premier event represents Permatex’s first participation as a NASCAR team corporate sponsor in almost four decades.

Paco Agrafojo, Permatex director of marketing, announced the StarCom sponsorship and noted, “Racing has been in Permatex’s DNA since the company started in 1909, so we are very excited to partner with StarCom Racing and Landon Cassill at this year’s Daytona 500. This is a great opportunity to introduce the Permatex brand to the newer generation of NASCAR fans, as well as keep the excitement going with loyal customers who have trusted Permatex products for years.”

An enduring legacy in motorsports

Permatex says it has a long and storied history in motorsports, and has supported many types of professional and amateur racing venues from circle tracks to drag strips to road circuits. Company founder, Constant A. Benoit Sr., began using his innovative sealants to prevent head gasket blowouts in endurance racecars in 1915. 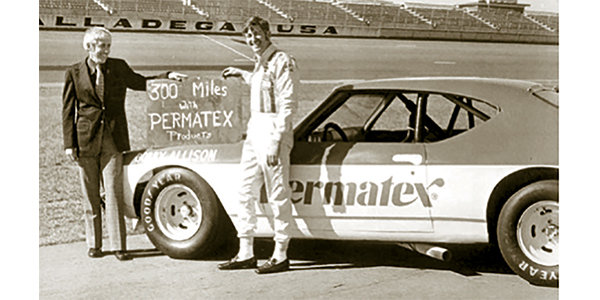 Bobby Allison with his Ford Galaxie 500 after completing an historic 300-mile run at Talladega with an engine assembled using only Permatex Sealants.

In 1936, legendary stock car driver, Bill France Sr., boldly assembled the engine of Milt Marion’s No. 23 racer using only Permatex sealants and helped him win the first stock car race at Daytona. Marion then drove an additional 20,927 miles across the country, probably the first “Lap of America,” just to see what the Permatex gaskets could do. In the mid-1970s, Bobby Allison made a 300-mile endurance run at Talladega using an engine that was assembled with Permatex gasket makers and threadlockers in place of cut gaskets and lock washers.

Permatex was actively involved as a NASCAR supporter and title sponsor from 1948 to 1977. The Permatex 300, inaugurated in 1966, was only the second race on the NASCAR schedule to be named for a corporate sponsor.

“Permatex and motorsports go back a long way, as does my passion for the sport,” said Michael Kohler, StarCom Racing, CEO. “Bringing Permatex back to Daytona, but this time for the Great American Race, has myself and my partners pumped for the launch of our 2019 season. We look forwarding to showcasing Permatex’s well-known and trusted brand on the big stage.”

“Racing is the ultimate challenge for our products and a great confidence-builder for all of our customers, especially when they see how well our products perform under the extreme demands of racing,” said Donny Braga, senior marketing manager at Permatex. “While we are competing at Daytona, we hope to shed the spotlight on two of our newest innovations, Permatex Orange Threadlocker, a new high-strength removable threadlocker, that that combines the holding power of a red threadlocker but provides the removability of a blue threadlocker and can be removed with hand tools, and our popular Permatex Right Stuff Gasket Maker, trusted and used by mechanics for years and now available in a 3 oz. squeeze tube called the Right Stuff 90 Minute Gasket Maker.”

Advertisement
In this article:Motorsports, permatex
Print
Up Next: