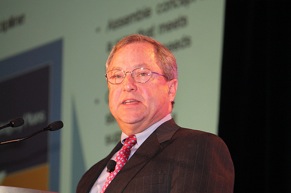 After a briefing by Freeland on Advance’s operations, AASA’s Steve Handschuh sat down for a Q&A with Freeland.

Handschuh inquired into Advance’s strategy positioning with regard to brands. “What we’re looking for is reputation of a brand,” Freeland said. “For ­example, we partnered with Federal-Mogul. It was a material part of what helped propel us into commercial. We don’t purchase from the lowest common denominator.”

Handschuh noted that several auto parts companies have brought in executives from well ­outside the aftermarket, particularly in retail. He asked what the challenges and benefits to this trend are.

“With any kind of abrupt change in leadership, I think you get some benefits and you get some challenges,” Freeland said. “The toughest challenge I’ve had is, this is a very unique industry, which can take a lifetime to master.” However, Freeland pointed out, people from outside the industry can bring experience and a perspective that someone might not have had if they’d spent all their time in the aftermarket.

“Are there too many auto parts stores?” Handschuh asked.

“If you look at Advance and O’Reilly, Advance doesn’t have stores on the West Coast,” Freeland said. “We’re not getting any of that market share. O’Reilly has no Florida or East Coast stores, but recently opened a distribution center in Florida. If you look at the individual players at the top, these appear to be rational decisions when a particular chain opens stores in a new location.

“This industry has seen players exit and it’s also seen lot of consolidation,” Freeland continued. “I think we’re going to see organic growth, mergers and acquisitions, and the closure of stores being replaced by a superior marketing model.”

Freeland noted that while there are challenges, it’s worth it to appeal and sell products to both commercial and DIY customers.

In his remarks before the Q&A, Freeland said when he arrived at Advance, 19 percent of DIYers started their parts search on the Internet. Now, it’s 55 percent. “It has a profound impact on our industry and on you, the suppliers. They’re essentially looking for what part it would take to repair the car; but only a small portion results in a purchase that’s shipped to their home.”

On the topic of Internet buying, Freeland noted that online sellers will greatly increase their sales if they concentrate on providing more information to the buyer. “If you use enhanced content — the picture of the part, accurate description of the part and several photos — we see a 17-fold increase in sales.”

Also at the breakfast, Bill Glasgow Sr. was ­bestowed with the MEMA Triangle Award, the highest honor bestowed by MEMA and AASA, for his long years of work on AAPEX.