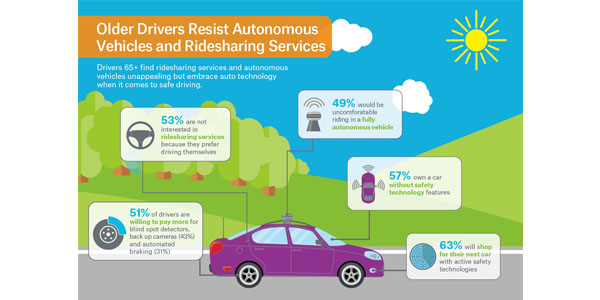 When asked what they believe to be the greatest benefit of active safety features for senior drivers, nearly half (41 percent) of the survey respondents cited improved safety of elderly drivers, maintaining their independence (19 percent) and reducing societal costs from accidents (13 percent). 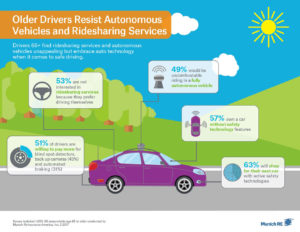 Older drivers are increasingly comfortable with and recognize the benefits of active safety technology, but they are still reluctant to relinquish total control to an autonomous vehicle, according to a nationwide survey of drivers age 65 and older by Munich Re, US.

Approximately two out of three (63 percent) drivers over age 65 intend to purchase their next vehicle with active safety technology. Blind spot detectors (51 percent), a backup camera (43 percent) and automated braking (31 percent) were identified by senior drivers as the most sought after features. Of those surveyed, 44 percent said they would be willing to pay more for a vehicle with active safety features if the added cost is less than $5,000.

Drivers over age 65 are currently one of the fastest-growing demographic groups in the U.S. and are more susceptible to accidents given the challenges they face such as declining vision, decreased flexibility and slower reflexes, according to the National Highway Traffic Safety Administration (NHSTA). The NHSTA also notes there will be more than 40 million drivers on the road in this age group by 2020.

“Active vehicle safety technology has the potential to reduce crashes in any age group, but may offer specific benefits for older drivers,” said Mike Scrudato, head of the mobility domain at Munich Re, US. “For example, the Insurance Institute for Highway Safety found that rear cameras had the biggest benefit for drivers age 70 and older, reducing the backup crash rate by 40 percent, compared with 15 percent for drivers younger than 70 years old.”

When asked what they believe to be the greatest benefit of active safety features for senior drivers, nearly half (41 percent) of the survey respondents cited improved safety of elderly drivers, maintaining their independence (19 percent) and reducing societal costs from accidents (13 percent).

While the results indicate that older drivers are comfortable with and recognize the benefits of this technology, they are still reluctant to relinquish total control to a car’s internal systems. Nearly half (49 percent) of respondents noted that they would be somewhat or very uncomfortable riding in a fully autonomous vehicle.

The survey found that the majority of older drivers (53 percent) would still prefer to drive themselves, even if ridesharing services were available at a reasonable cost.

Scrudato added, “Autonomous vehicle technology has the ability to transform the U.S. transportation ecosystem. While widespread adoption may still be some years away, this technology carries a variety of opportunities and potential risk exposures that governments, regulators and the insurance industry must begin to prepare for now.”

For more information about autonomous vehicles and insurance, visit Munich Re, US Innovative Solutions – Mobility.

Advertisement
In this article:automated vehicles, connected, Generation, Research, vehicle safety
Print
Up Next:

Older Drivers Embrace Active Safety Features But Resist Autonomous Vehicles, According To Munich Re, US Survey