Richard Dauch, 71, co-founder and executive chairman of American Axle & Manufacturing, passed away at his home on Aug. 2, 2013.

Richard Dauch, 71, co-founder and executive chairman of American Axle & Manufacturing, passed away at his home on Aug. 2, 2013. 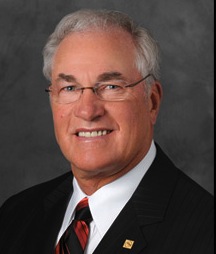 He graduated from Ashland High School in Ashland, Ohio, in 1960. Earned All-Ohio honors in football. A proud Purdue Boilermaker, he received a scholarship to play football earning several varsity letters. He received his Bachelor of Science degree in Industrial Management in 1964.

Upon his college graduation, he started his career in the auto industry joining General Motors at their Chevrolet Flint Assembly plant where he went through management training and various plant supervisory positions. In 1973, he became the plant manager at the Chevrolet Spring & Bumper plant in Livonia, making him at age 30, the youngest plant manager in GM’s history at that time. His next assignment was in the Detroit Zone Sales operations for a year. His final assignment for GM was as plant manager of the Detroit Gear & Axle Manufacturing Complex.

In 1980, he joined Chrysler Corp., where he was able to lead manufacturing initiatives to improve quality, production and labor. His key innovations were three-shift assembly, just-in-time materials management and sequential production.

“Dick was practicing lean manufacturing and leading the quality revolution years before those terms became part of the business conversation,” said former Chrysler Chairman Lee Iacocca. “He put his heart and soul into the auto industry, and the success of AAM is proof of this dedication.”

Dick was the co-founder of American Axle & Manufacturing (AAM) in March 1994. He served as chairman of the board from 1997 until his passing. Most recently, he served as executive chairman of the board. He also served as CEO from 1994 to 2012, and was president of AAM from March 1994 to December 2000. He was known for his distinctive, direct, "get-it-done" style of management that helped AAM become one of the top automotive suppliers in the world and traded on the New York Stock Exchange under the symbol, AXL.

Former Michigan Gov. John Engler worked closely with him through the years. He remembers, “Dick’s vision became reality. Failing plants became profitable, a blighted area of urban Detroit became an oasis and AAM produced products that succeeded globally. Dick Dauch showed us how that vision can be replicated nationally and internationally applying the lesson of Detroit and Axle, leadership and team building, quality and innovation to U.S. Manufacturing and our nation’s economy.”

Dauch’s reputation as an innovative manufacturing strategist and entrepreneur is widely recognized in North America and around the world. In addition to lecturing extensively on the subject of world-class manufacturing, he authored two books, “Passion for Manufacturing” and “American Drive” which was released in 2012.

Dauch sat on the board of directors of the National Association of Manufacturers (NAM) and served as chairman of the Manufacturing Institute. He is a past member of the board of directors of Detroit Renaissance and the board of the Detroit Economic Club. In 2006, Dauch served as the general chair of the United Way for Southeast Michigan’s Torch Drive campaign. He was past chairman of the board of directors of the Detroit Regional Chamber. He was very involved in the Boys & Girls Clubs of Southeastern Michigan, and the Boy Scouts of America-Detroit Area Council, which presented him with its “Man and Boy Award” in 1990. In 2012, Dauch was honored with the Distinguished Citizen Award, and was also presented with six merit badges reflecting his involvement in athletics, his citizenship and his career in the automotive industry.

Generous donations from the Dauch family helped create the Richard E. and Sandra J. Dauch College of Business and Economics at Ashland University; the Dauch Center for Management of Manufacturing Enterprises at Purdue University and the Dick and Sandy Dauch Alumni Center also at Purdue. In addition, the Dauchs partnered with the National Football League to establish the NFL/YET Boys & Girls Club at the Dick & Sandy Dauch Campus in Detroit, Mich. They also collaborated with the Boy Scouts of America to establish the Dauch Scout Center in Detroit, Mich.

Unafraid of controversy or hardship throughout his career, Dauch did whatever it took to get the job done. In his book “American Drive” he declared, “I hope to live long enough to see one or more U.S. auto companies listed again among the Dow Jones 30. But even if I don’t, I do believe U.S. manufacturing will continue to grow and prosper and lead our country back to a solid economic footing. It is already happening. We have only begun to show what we can do. Manufacturers in the U.S.A. have accepted the challenge of world competition and are poised for great things in the years ahead. I am fiercely proud of the creation, success and sustainability of AAM based in Detroit, Mich. We are one of America’s premier global automotive manufacturers. We have done it against all odds. It has been greatly fulfilling.”

In lieu of flowers, the family suggests memorial tributes to:

To share your thoughts, memories, and condolences, email [email protected].