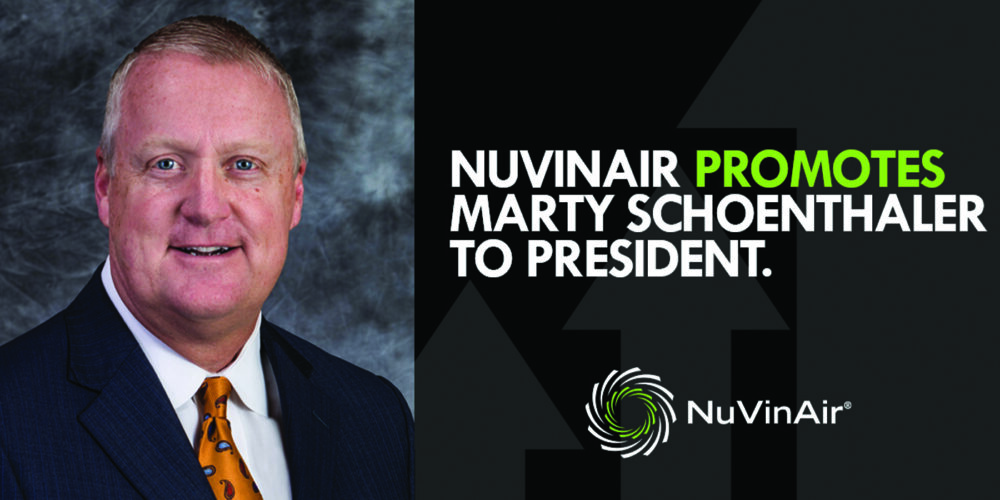 NuVinAir, which offers a of proprietary products to safely and effectively create clean and healthy vehicle interiors, has named Marty Schoenthaler as president, while maintaining his current role of CFO. Reporting to Chief Executive Officer and founding partner Kyle Bailey since October 2021, he will be responsible for the company’s day-to-day operations, while Bailey will focus on company strategy and product development.

“Since joining the company two years ago, Marty has developed a unique relationship with our franchisee family, one that has been built on a deep level of commitment and mutual respect,” said Bailey. “As we swiftly scale nationwide, I am proud and confident that with Marty at the helm as President, he will continue to deepen these partnerships and set them up for achieving ever greater success.”

With a career spanning three decades, Schoenthaler offers leadership in maximizing organizational capability, strategy development, business transformation, and customer success. He joined NuVinAir from Tate Boys Tire & Service, one of the largest independent tire dealers in Oklahoma, where he served as CEO. Earlier in his career, Marty served as chief information officer at Archer Daniels Midland Company, as well as general manager of Corporate Information Technology at ConocoPhillips. After earning an MBA from the University of Arkansas, he began his career at IBM Corp.

“From my very first day with NuVinAir, I have been focused on developing operational improvements and franchisee relations. Collaborating with our leadership team and franchise network alike to effectively deliver on those strategies, is a huge source of pride for me,” said Schoenthaler. “As President, I’ll lead and carry out my new responsibilities through the lens of NuVinAir’s vision, mission, and overall direction in order to ensure optimal efficiency and success.”

Under Schoenthaler’s leadership is Cole Willford, who joins NuVinAir as vice president of business development. In his new role, he is responsible for developing business opportunities with the company’s nationwide franchisees to drive profitability while supporting the company’s overall growth. With a career in technology and manufacturing spanning 20 years, Willford previously worked at Bridgestone Americas, where he served as regional manager, directing 10-14 multi-unit leaders, 6 regional staff members, and 1,200 employees. Earlier in his career, he served as territory services manager at Best Buy for more than 13 years, focusing on transformational change and profitability growth. He is also currently pursuing an MBA from the University of Arizona.

Also reporting to Schoenthaler is Matthew Golimowski, who has been promoted to vice president of franchise operations. Since joining the company in October 2019, he has been responsible for developing and implementing strategies that support the company’s franchisee business and financial objectives. An automotive-industry veteran, Golimowski joined NuVinAir from AutoNation, where he served as general manager. He launched his career at CarMax, where he worked for 17 years, ultimately climbing the ranks to general manager and spearheading operations for a CarMax Auto Superstore.