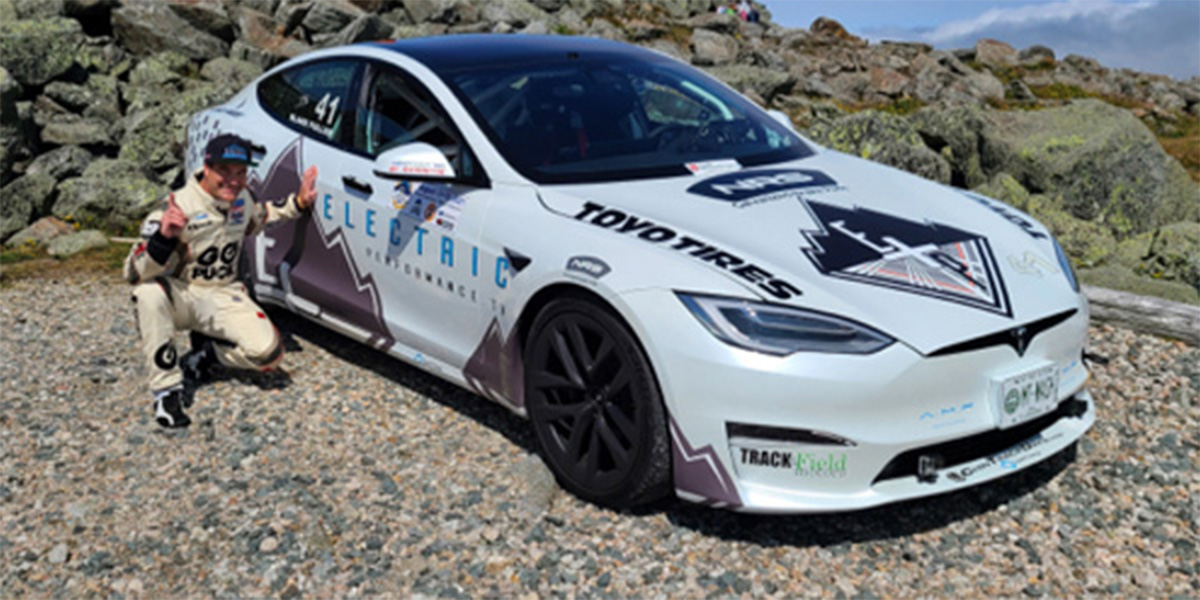 On Aug. 15, Blake Fuller became the first “stock electric” winner in the history of “Climb to the Clouds.”

Blake Fuller, a three-time winner and twice electric production record holder at the Pikes Peak International Hill Climb, raced a 2021 Tesla Model S Plaid to the 6,288-foot summit and crossed the finish line on the morning of Aug. 15, becoming the first “stock electric” winner in the event’s 117-year history.

When Fuller crossed the finish line, his time of 7 minutes and 23 seconds set the first record for the “Stock Electric” class. That afternoon, after his second run and all the competitors finished, Fuller beat that record time, and became the fastest driver ever up the “Climb to the Clouds” in an electric car.

The 2021 Mt. Washington “Climb to the Clouds” allowed competitors two runs up the treacherous course to set a fastest time. Despite having an average speed over 60 mph in his first run, Blake explained after the first run: “With no practice or testing on this deadly course, controlling over 1,000 hp in a 4,400-pound car, my No. 1 goal was to make history. My next run will better demonstrate for all the fans of Tesla and electric cars, more of what the new Model S Plaid Electric Performance TV race car can do.”

Demonstrating a perfect balance of precision and aggression, Fuller established another new record, crossing the finish over 17 seconds faster than his history-making run earlier in the day with a time of 7 minutes, 5.841 – a new record for the “Stock Electric” class at an average speed over 62 mph. And, as the official results for all the competitors came in, Fuller now holds the title as the fastest electric driver of any class.

Fuller summarized his thoughts on making history, setting records and being the fastest electric driver at Mt. Washington.

“Before the race, it seemed the goal of finishing this event would be one of the biggest challenges in my racing career,” Fuller said. “Our results could not have happened without the great community of individuals that support the Electric Performance TV racing team our technology partners like NRS Brakes. From the data gathered at Mt. Washington and track testing after the event, I am very excited to work with NRS Brakes to develop products for the new Model S Plaid.”

“Following this epic result, I am already looking forward to the 100th Pikes Peak International Hill Climb,” Fuller said. “I used NRS Brakes’ galvanized brakes pads on my 2016 and 2020 record-breaking Tesla race cars. This data and continued development will enable NRS Brakes to provide the best set-up for much-needed braking performance to the exceptionally powerful Model S Plaid on these dangerous roads. And, of course giving us a chance to break my previous record.”

“We already knew that Blake was a phenomenal driver, and in 2020 we helped pair him with the best brake pads available in the market: our award-winning NRS galvanized brake pads,” Khokhar said. “The result was a record-breaking finish at Pikes Peak and we’ve supported him since.”

Advertisement
In this article:Motorsports, NRS Brakes
Print
Up Next:

Events: Deadline Approaching for Women at the Wheel Nominations

SKF Wheel End Products Showcased at HDAW 2022
Connect with us